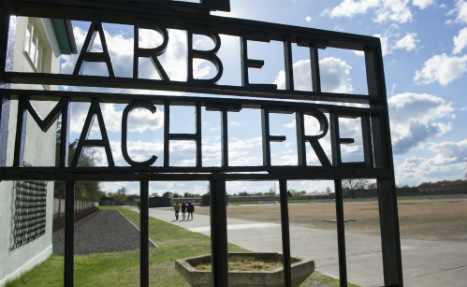 “Due to an anonymous tip-off, police in Norway's Bergen have secured an iron gate with the well-known text,” said Bavaria state police.

“From the picture transmitted, police believe it is highly likely that this is the iron gate that was stolen from Dachau.”

The theft of the 100-kilogramme (220-pound) gate was reported on November 2, 2014, sparking an uproar, with Germany's Chancellor Angela Merkel calling it “appalling”.

It was first used to incarcerate political prisoners but during World War II, it became a death camp where more than 41,000 Jews were slaughtered before US troops liberated it on April 29, 1945.

Another sign with the same inscription at the former Nazi death camp Auschwitz was stolen in 2009.

The mastermind of that theft, Swedish neo-Nazi Anders Hoegstroem, was caught and jailed for two and a half years.

The metal sign was eventually recovered cut up into three pieces. A replica was displayed above the entrance until it was restored in 2011.