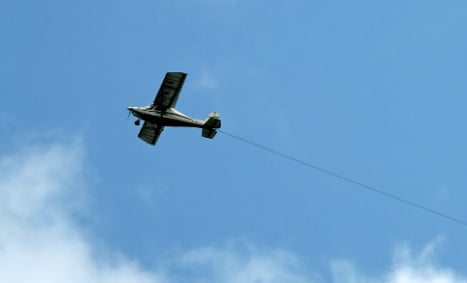 Back in March this year, The Local reported on a pilot and flight teacher from Stade, Lower Saxony who turned his flight path from Stade to Helgoland into an artistic display, by taking a detour in the shape of a plane.

Drawing objects on Flightradar24 has reached a new level.https://t.co/v7NdZR2eOV pic.twitter.com/Vvcv6e9UO3

Well, he's been at it again.

Yes, this time it is a plane, the same Robin DR400/180 Régent aircraft that drew the plane, drew a big 'hello' symbol in the sky using its flight path on November 28th.

It took the pilot 37 minutes to complete the word over Lower Saxony, in northwestern Germany.

He also likes to sign off his art, having flown a signature into his flight path on several trips.

Today's airplane artist returned to add a signature to their artwork. https://t.co/xLLUv877ew pic.twitter.com/cI44TclnjP

However, the signature doesn't lead us any closer to identifying this secretive sky scrawler, and the identity of the pilot remains unknown.

The pilot has also shown a softer side, drawing a heart over Schleswig-Holstein in March. Perhaps it was for a special person in his life, or perhaps he just wanted Flightradar to know that he loves what they're doing.

If you were the fortunate recipient of this romantic gesture then feel free to get in contact with The Local to shed some light on the mystery man's intentions and motivations.

You can track the next inventive flight path of this mysterious pilot by setting an alert for his plane registration – D-EFHN – on flightradar24.