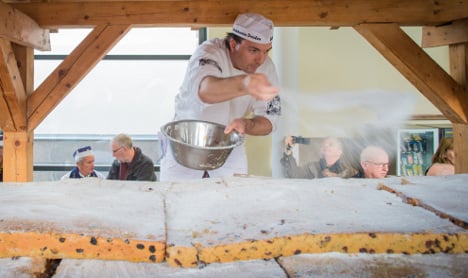 A baker preparing the traditional giant Stollen treat in Dresden in 2014. Photo: DPA. The 2015 Stollen Girl stands in front of the giant cake next to the traditional 1.6 metre Stollen knife. Photo: DPA

The people of Dresden take things pretty seriously when it comes to Stollen – a fruit bread coated in sugar traditional to German Christmas. For 21 years, they have celebrated Stollenfest on the Saturday before the second Sunday of Advent.

A crowd of bakers and Stollen-aficionados parade a specially made giant Stollen through the streets of the Old Town. Each year, a Dresden Stollen Girl is elected as the best trainee baker, and she accompanies the huge loaf.

Today, the giant cake is still cut up into thousands of pieces, using a special 1.6 metre knife weighing in at 12 kilograms, and is then sold off at the Christmas market. “Cowboy boots instead of winter boots” is the motto for this year’s Tollwood winter festival in Munich's Theresienwiese, the huge area where Oktoberfest is held.

The festival, which this year concentrates on “sustainable mobility”, tries to educate visitors about the advantages of carpooling, public transport and cycling.

If you’ve got a sweet tooth, then you would be mad to miss Germany’s biggest chocolate festival at the beginning of December. Taking place in Tübingen’s old town, the festival brings together over 100 of the top international chocolatiers from all corners of the world.

Across six days, you can sample chocolates from Africa, South America, Europe and more. Alternatively, you could sip on some of the best drinking chocolate around, or swat up on your choco-knowledge by attending courses and demonstrations.

The festival also places a lot of emphasis on the chocolate-making process, promoting fair treatment of the 14 million people whose livelihoods depend on chocolate production.

The show includes a fairy tale landscape in which visitors can wander through one and a half kilometres of “breathtaking light shows, bright dream forests and magical light figures” far from the packed crowds of Berlin's Christmas markets.

At the end of the adventure, there are a variety of food stalls offering local culinary specialties, as well as fire pits to gather round. For the more athletic, there is also a 300-metre squared ice rink. You can’t be in Germany in December without visiting a Christmas market, but the tricky part is choosing which one to visit.

Click here to see ten of Germany's most unmissable Christmas markets, ranging from the über-traditional to the totally wacky.

A Circus Krone performance in Munich in April 2015. Photo: DPA

Europe’s biggest circus opens for its winter season on Christmas Day. One of the few circuses to have its own permanent building, this Munich troupe is one of the best.

Once an integral part of European entertainment, circuses of this quality are now few and far between. Although many are put off by these institutions, Circus Krone emphasizes the importance of treating their animals well.

From breakdancing to trapezes, and llamas to lions, it certainly promises to be an impressive display. The New Year's celebrations for 2016 at the Brandenburg Gate in Berlin. Photo: DPA

Silvester, or New Year’s Eve as we know it, is a big occasion in Germany. And of course the capital throws a party to be reckoned with. Each year around a million revellers gather around the Brandenburg Gate to welcome in the new year, and the two-kilometre road to the Victory Column in the Tiergarten park turns into one long party avenue.

However, Berlin is not the only city to bring out the fireworks. Munich, Frankfurt and Hamburg will also host huge parties to celebrate the beginning of 2017.