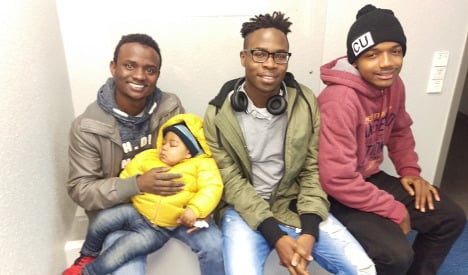 Photo: German federal police
A 21-year-old mother was travelling on a regional train from Essen towards Bochum, North Rhine-Westphalia on Sunday morning, struggling with full hands carrying luggage as well as pushing her infant son in a pram.
When the train stopped at her destination at Wattenscheid station, she first unloaded her luggage onto the platform, and then went to retrieve the pram. But the doors closed before she could grab the baby carriage, and the train chugged away with her baby going along for the ride, police reported.
Train station workers immediately saw what happened and alerted federal police, who oversee train stations.
For the short ride until police could catch up to the baby carriage at the central station, the tiny tot was cared for by three teenagers from Guinea, who were taking German classes in the area.
Once the train arrived at Bochum central station, police could retrieve the pram, and reunite mother and baby – who apparently had had a nice nap during all the drama.