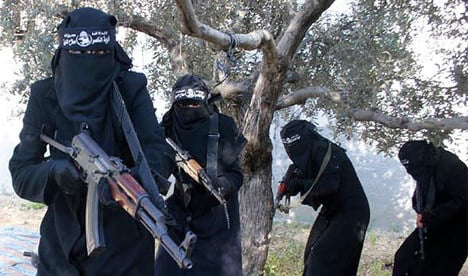 Screenshot from a propaganda video of an Isis unit in Syria. Photo: DPA/Syriadeeply.org

One in four jihadists who returned to Germany after going to fight with terror groups in Syria or northern Iraq cooperate with authorities, according to a new government report seen by Die Welt and reported on Monday.

The report was conducted by the Federal Criminal Police Office (BKA), domestic security agency the Federal Office for the Protection of the Constitution (BfV), and the Hessian Information and Competence Centre against Extremism (HKE).
The 61-page report showed that in recent years, around 850 people have left Germany to fight in Syria and Iraq. The study reviewed the actions of 784 people between the ages of 13 and 62 who had joined Isis, Jabhat al-Nusra or Junud al-Sham.
More than one-third (274) of those analyzed had returned to Germany, and about half (48 percent) of those who had returned were still devoted to their extremist cause.
The authorities further believe that 8 percent of returnees had made a “tactically-motivated return to recover to procure new equipment or money”. Another 10 percent are believed to have returned after they became disillusioned or frustrated.
The report further looked into the various factors that had led to fighters becoming radicalized in Germany, listing multiple reasons for each person evaluated. More than half (54 percent) had been at least partially radicalized through friend groups, 48 percent through radical mosques, 44 percent through internet propaganda, 27 percent through attending seminars and 24 percent through the “Lies!” Koran distribution programme, banned earlier this month alongside countrywide police raids.
“Radicalization happens predominantly in concrete social spheres,” the study states.
Hesse state interior minister Peter Beuth told Die Welt that he and his colleagues feel heightened pressure to prevent more radicalization.
“We want to prevent people from drifting towards extremism,” Beuth said.
This is why in 2013, his state founded the HKE, which falls under Beuth’s interior ministry. The state of Hesse was also where the largest number of raids took place on the Lies! programme run by the banned group The True Religion on November 15th.
Around 200 addresses across ten states were raided in connection to the group, which was also newly categorized as a banned group at the time. The Lies! programme distributes copies of the Koran in German, which experts say are translations with particularly strict versions of the original Arabic texts. The Interior Ministry said at the time that around 140 people influenced by the group had gone to fight in Syria and Iraq.
Decrease in Islamists heading to war zones
The new government study showed that of Islamists who travelled to Syria and Iraq, one third are still reportedly in the conflict zones. Another third have by now returned, 12 percent of whom have been imprisoned.
The remain third of them are most likely either in another country or their statuses are unknown.
The report noted that there has been a significant drop in the number of people recorded as heading to conflict zones. Between July 2015 and June 2016, 49 people were registered by authorities as leaving. In 2014, as many as 100 people per month were leaving.
This decrease may have to do with the “seriously waning appeal of Isis”, but also with Isis’ call for supporters to attempt attacks in their own homelands, the report notes.
“The work of authorities, as well as the monitoring and arrests of those departing or entering has had an impact,” said Bavarian interior minister Joachim Herrmann to Die Welt.
Still, he added that one must see in a year whether the trend will hold.
The report found that 21 percent of the jihadists analyzed were women, and this proportion was growing, along with the number of minors (7 percent). Most (61 percent) were born in Germany while the rest were mostly from Turkey, Syria, Russia, or Lebanon.
Most had German citizenship and 27 percent had double citizenship, mostly German-Turkish, German-Moroccan, or German-Tunisian.