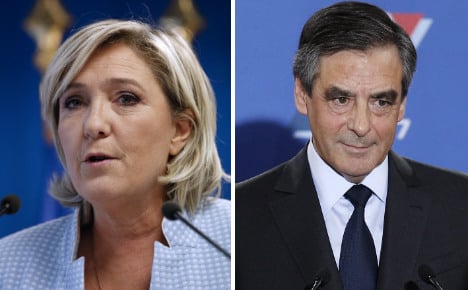 Fillon secured the nomination of the French conservative Republicans on Sunday with a resounding victory over his more moderate challenger Alain Juppe.

That in itself is cause for relief in Germany, France's traditional core EU partner, which has been rattled by the US election of Donald Trump, the Brexit vote and the rise of right-wing populism in Europe.

“Any French president who is not Marine Le Pen is good news for the German government,” said Stefani Weiss, analyst on European issues at think tank the Bertelsmann Foundation.

There are other reasons why a Merkel-Fillon duo at the heart of Europe should at first glance be a good fit.

Both are from the conservative political family and rooted in the Christian faith, he a Catholic and she a Protestant.

The Frenchman's pledges to drastically shake up the economy and slash state spending are welcomed by the German government, which staunchly preaches austerity and balanced books.

Fillon, a self-professed Thatcherite, is depicted in Germany like a French version of former German chancellor Gerhard Schröder, who drove home painful social welfare reforms in the early 2000s.

While deeply contested in those days, the policies of Schroeder, a Social Democrat, have since been credited with bringing down unemployment and making the German economy more competitive.

But scratch a little deeper, and stark differences emerge between Fillon and Merkel, particularly on their visions on how Europe should be run.

The French former prime minister sees a bloc piloted by individual states rather than by Brussels, while Germany is content to let the European Commission police certain issues, including the level of state deficits.

On the thorny subject of refugees and migration, Merkel wants a quota system in place for each EU member to take their share of asylum seekers.

This might be a tough sell for Fillon, who has argued that France has a “problem linked to Islam”.

But most crucially the two differ on foreign policy, and on how Russia should be handled.

Fillon, accused by his critics of being too close to President Vladimir Putin, has called for the lifting of sanctions that were imposed after Russia annexed Crimea from Ukraine.

He believes the EU and United States “provoked” Russia by expanding NATO's presence into eastern Europe.

Fillon has also urged an alliance with Putin and Syrian President Bashar al-Assad's regime against the Islamic State group.

These positions differ with those of Merkel, who has kept the phone lines open to Putin but adopted a firm approach against Russia's encroachment in Ukraine.

She is worried by Trump's admiration for Putin, has condemned Russian bombing of Syria's Aleppo as “inhumane and cruel”, and refused to rule out imposing further sanctions on Moscow.

“In the diplomatic arena, there may be problems between Fillon and Berlin, with the first issue being policies vis-a-vis Russia,” said Barbara Kunz of the Study Committee on French-German Relations.

Kunz said all this meant that, “even if no one is saying it openly, the Germans prefer Alain Juppe”.

A member of the chancellor's party, speaking on condition of anonymity, agreed on this point, saying that the former prime minister's less hardline profile is a “better Merkel-fit”.

Norbert Röttgen, who heads the German parliament's foreign affairs committee, also said that “there is no doubt that there is a major difference” between Fillon and Germany's position on Russia.

“It's not just about Ukraine, but also about whether Europe can remain a whole, a free continent” or is once again divided between a “free Europe and a zone of Russian influence”, he told AFP.

“Sanctions are precisely the expression of a united rejection of Russia's position, which holds that might is right,” he added.

“We have a fundamental disagreement on the issue of Russia and we need to speak about this with Francois Fillon.”