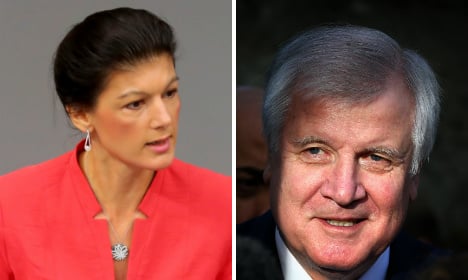 The leader of the German state of Bavaria has invited Donald Trump to visit, reports said on Thursday, after he urged European politicians to keep an open mind about the controversial US President-elect.

Premier Horst Seehofer, a maverick member of Chancellor Angela Merkel's conservative bloc, wrote to Trump to congratulate him on his victory and said he would be welcome “any time” in his state capital Munich, Bavarian government sources told DPA.

Specifically, Seehofer, who is often criticized for his overly populist politics, suggested Trump could attend the city's annual international security conference in February, just weeks after his inauguration as US president on January 20th, the unnamed sources added.

Left Party leader Sahra Wagenknecht on Wednesday said “clearly even a man like Donald Trump has more political-economic understanding than you,” she said, addressing the German government in a Bundestag (German parliament) debate.

“At least he has understood that state-led industrial investment is better than cheap service jobs, and that it isn't austerity that helps prevent crisis and disintegrating infrastructure, but large-scale public investment.”

Wagenknecht lamented a political class out of touch with an ever more dissatisfied electorate, saying “whoever does nothing against this should stop feeling morally superior to Trump and [Marine] Le Pen.”

Thomas Oppermann, faction leader for the SPD, replied by criticizing “how you admire the economic competence of Donald Trump and at the same time rant at the European political elite who apparently only serve the powerful.”

'Let's see what he does'

In contrast with many German and European officials, Seehofer warned soon after the November 8th US election against prejudging Trump too harshly.

“I would urge us to see what he actually does,” Seehofer said, calling for dialogue between Germany, European partners and the United States on “shared policy”.

Seehofer has frequently clashed with Merkel over her liberal border policy, which permitted the arrival of around one million asylum-seekers over the last two years.

But she stressed that relations must be based on the “values of democracy, freedom, respect for the rule of law and human dignity, regardless of origin, skin colour, religion, gender, sexual orientation or political belief”.

But relations are likely to be complicated after Foreign Minister Frank-Walter Steinmeier called Trump a “hate preacher” during the summer.

Meanwhile the German public seem to fear the billionaire, while at the same time not taking him very seriously.

Trump, whose paternal grandparents hailed from Germany, is expected to attend the G20 summit, which Merkel will host in Hamburg next July.