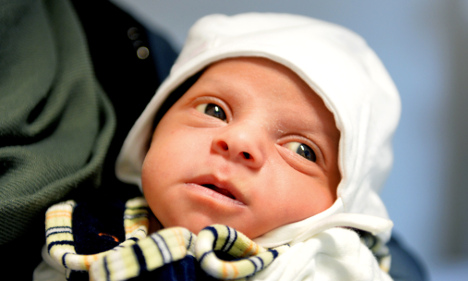 Tema and Mamon Al-Hamza had arrived in Germany from Syria last year, Tema was already very pregnant and gave birth to a baby girl on December 27th. They decided to name her after their host country’s Chancellor as they were thankful to be welcomed to Germany, broadcaster N-tv reports.

But as the family gets ready to celebrate baby Angela’s first birthday, they have received some very disappointing news: Their asylum application was rejected by the Federal Office for Migration and Refugees (BAMF), Bild reported on Wednesday.
“The letter made me very scared,” said Mamon.
The family has instead been granted “subsidiary protection”. This protects people from deportation if returning to the home country were to entail the “threat of the death penalty, torture, inhumane or degrading treatment or other existential threats – meaning that the foreign national is to be regarded as vulnerable,” the BAMF website states.
For the Al-Hamza family, the decision means they will be able to stay in Germany for initially one year, but may not have family members join them in their new home.
After the first year, they may stay longer if they meet certain conditions, such as making a sufficient livelihood and learning enough German.
In October the Süddeutsche Zeitung reported that 17,000 refugees have sued German authorities since March for not giving them full protective status, with over 90 percent winning their cases.
But a federal court ruling on Wednesday declared that authorities do not have to give full refugee status to all Syrians, meaning thousands of families are likely to be kept apart due to the restrictions that subsidiary status places on bringing over family members.

The court had deliberated on whether Syrians who return to their country would likely be victims of persecution, arrest or torture. It concluded that there was no evidence of systematic interrogation in Syria, basing the decision on a statement by the Foreign Ministry.

It further said that each Syrian's case had to be dealt with individually by German authorities.

“The UNHCR has indicated that there is a pattern whereby returning Syrians are imprisoned and disappear,” said Bernd Mesovic from refugee NGO Pro Asyl.

“When in doubt, the protection of refugees should take precedent. But the higher one goes up the court ladder, the more political the justice system becomes.”