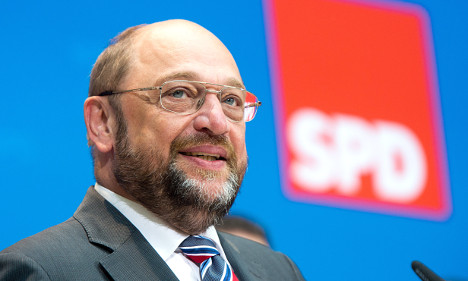 “It was not an easy decision to make,” Schulz said at a press conference in Brussels on Thursday morning.

“It has been a great honour to serve as president for these years.”
He explained that he would campaign for a seat in the German parliament as the head of the list of his party, the Social Democrats (SPD), in North Rhine-Westphalia.
The Süddeutsche Zeitung (SZ) first reported that Schulz, 60, “will make a switch to Berlin”.
However, it remains unclear if Schulz will be the lead candidate for his Social Democratic Party (SPD), currently junior coalition partner in Merkel's grand right-left coalition government.
Vice Chancellor Sigmar Gabriel now leads the SPD, but he is grappling with poor popularity ratings.
The SZ and Spiegel both reported that Schulz could very well be a potential choice as candidate for Chancellor for his party, running against Merkel in the election next autumn.
According to Spiegel, Schulz made his decision to step down as EU Parliament President in close consideration with Gabriel. SPD sources also told Spiegel that the party has a set plan to announce a decision about a candidate for Chancellor at the end of January, and Schulz is set to remain in his current office until mid-January.
According to a survey by Stern magazine and Forsa Institute released on Wednesday, Schulz would win a larger percentage of votes against Merkel than Gabriel would if the Chancellor were directly elected (which he or she is not).
The poll showed that if Schulz ran against Merkel, he would receive 27 percent of votes, compared to 49 percent for Merkel, but Gabriel would only take in 16 percent if he ran against the current Chancellor.
Schulz's name has also been circulated as a potential replacement for German Foreign Minister Frank-Walter Steinmeier, who is expected to quit the post early next year as he has been nominated as the country's next president.
“In any case, no decision has been made” on who would be the candidate to challenge Merkel, said the Süddeutsche Zeitung.
Merkel on Sunday declared that she will seek a fourth term by running as the Christian Democratic Union (CDU) candidate.