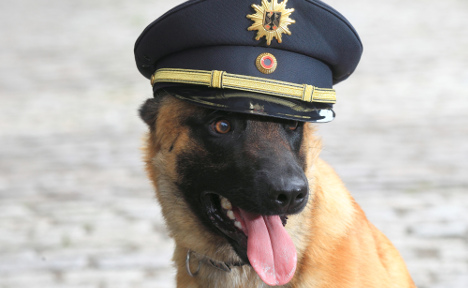 As tired journalism professors often like to remind their students, it’s not news if a dog bites a man because this happens all the time. But a man biting a dog is certainly headline material.

As is the case for an alleged thief in the western town of Olsberg, North Rhine-Westphalia.
Three men robbed a supermarket on Monday afternoon, hotly pursued by a shop worker until they reached a train station and the worker decided to alert police. The trio ditched their loot worth around €1,000 by the train station when they saw police coming and fled into a nearby wooded area, according to a police report.
Police then sent out their dog Pepper and her handler in search of the men. The perceptive pooch managed to track down and corner a 39-year-old suspect, who then tried to fend off the canine by – yes – biting her on the muzzle.
The man also bit Pepper’s handler on the hand – but this alone would not be news.
The suspect was ultimately restrained and arrested, though his accomplices managed to get away. Both Pepper’s handler and the man were treated in hospital for light wounds. Pepper herself remained unharmed.
Police are continuing the investigation.