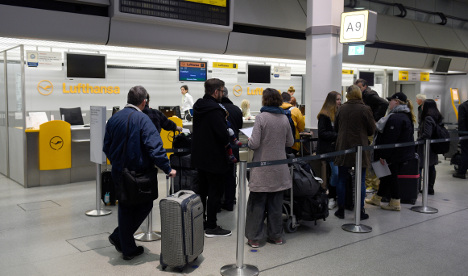 The strike on Wednesday impacted an estimated 100,000 travellers after 876 flights were cancelled. The cancellations set for Thursday will ground another 115,000 passengers, Lufthansa said on Wednesday.

The stoppage, called by the pilots' union Cockpit (VC), was initially set to be 24 hours just for Wednesday, but the union said late on Tuesday that the strike would continue into Thursday for both long- and short-haul flights leaving Germany.

Lufthansa had attempted to stop the strike by filing for an interim injunction, but a court for the state of Hesse rejected the injunction.

“VC's demand for a more than 20 percent pay increase goes far beyond what other employee groups have received,” said Lufthansa personnel manager Bettina Volkens in a statement.

But the union maintained that their requests are on par with industry standards.

“We have been disconnected from wage developments in Germany over the past five years and therefore we do not want to just look on anymore,” said VC spokesman Jörg Handwerg to broadcaster ZDF, adding that as long as Lufthansa does not put forth a “negotiable offer,” there could be further walkouts.

The hashtag #lufthansastreik (Lufthansa strike) was the top trending term in Germany on Twitter as of Wednesday morning.

Many social media users expressed their frustration with the labour action.
“I cannot comprehend the Lufthansa strike,” wrote one Twitter user. “Stop this! You are wrecking the company and making passengers unhappy!”

“Going back home from China. Lufthansa is going to stop me 12 hours at Frankfurt airport,” tweeted another.

Going back to home from China @lufthansa is going to stop me 12 hours at Frankfurt airport. #lufthansastreik #stopsyou

Others were more sympathetic with the pilots.

“And everyone is like 'mimimi, I can't understand it',” wrote one woman from Dresden. “Whoever is able to strike should strike. To each their own rights.”

Meanwhile a separate walkout by cabin crew at Lufthansa's low-cost airline Eurowings led to the cancellation of more than 60 flights at airports in Hamburg and Düsseldorf on Tuesday.
The industrial action was called by Germany's biggest services union Verdi in a row over pay and working conditions.

The Lufthansa pilots going on strike are demanding a pay rise of an average of 3.66 percent per year, retroactive for the past five years.

The union says pilots have endured a wage freeze over that time and suffered a “significant loss of purchasing power” due to inflation, while Lufthansa has made billions in profits.

The airline had offered a 2.5 percent wage hike.