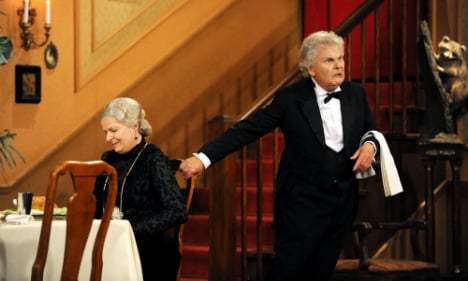 Karl Garff and Eva-Maria Keller performing the iconic “Dinner for One” in Hesse, which although it's a British sketch has become a German must-watch on New Year's Eve. Photo: DPA

The “customer is always right” rule just doesn’t really apply here. You can't be in a rush in many German restaurants, as the waiter will often pay you zero attention – and expect them to argue back if they get your order wrong.

Don't panic if you get a letter from a German bureaucrat threatening the absolute worst. Germans love making everything official by what many foreigners may consider to be an outdated system – postal mail – and they love even more writing terrifying letters.

And if you're a bit behind on paying your German public broadcaster fee, they'll soon start threatening to seize your car – even if you don't in fact own one.

A simple phone call or – of course – letter explaining that you've already made the payment online will always diffuse the situation, perhaps much to your surprise after receiving such startling threats. For example, German citizens whose parents or even grandparents came from Turkey are still often referred to simply as “Turks” rather than Germans.

And Americans who find costumes like “Red Indian” and blackface offensive may also be surprised to find these readily available in dress-up shops in Germany, where the cultural significance is clearly different.