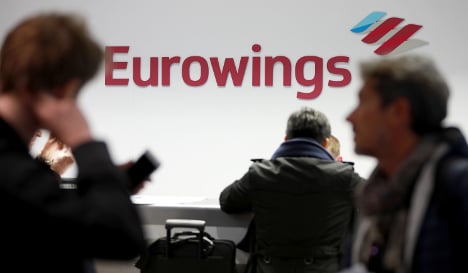 Travellers at both Hamburg and Düsseldorf airports can expect cancellations and flight delays due to the strike called by union Verdi, set to last until 8pm on Tuesday.

In Düsseldorf 50 out of 88 total planned flights were cancelled, including flights to Berlin, Prague and Vienna. The remaining 38 flights are still set to take off, according to a spokesman from the airport, though there could be changes to flight schedules as the day goes on.
At Hamburg airport, seven departures and seven arrivals were cancelled from the flight plan.
Eurowings advises travellers to check flight schedules online ahead of their departure times.
Verdi called the strike in protest over pay and working conditions, after competing trade union Ufo held a strike last month over similar labour disputes with Eurowings and Germanwings.
One of the top ten trending phrases on German Twitter Tuesday morning was #Eurowings, with disgruntled travellers venting about the strike.
One Twitter user complained of the “inconvenience” and about having to spend one hour on the phone with customer service to reschedule.

strike by #Eurowings this time the workers council. Such inconvenience & 1 hr on tel to reschedule #badcustomerservice

Another complained about the strike impacting their work schedule

“Yea hello, because of you I'm going to be too late to work. Should I go the some 10km by foot”

Another Twitter user though was sympathetic to the cause.

And travel troubles will not be over on Tuesday: pilots for Eurowings’ mother company Lufthansa are set to strike on Wednesday.

The union Cockpit called for the industrial action after negotiations stalled on salaries for the 5,400 pilots employed by Lufthansa, Lufthansa Cargo and budget subsidiary Germanwings.

Pilots are seeking a retrospective salary increase over the past five years totaling 20 percent. The pilots have not received a wage increase since 2012 when their last contract expired.

The airline had attempted to prevent the new round of strikes by calling in arbitration. But Cockpit described the salary proposal offered by the company as “not worthy of arbitration”, according to the Süddeutsche Zeitung (SZ).

On Wednesday long and short haul flights are set to be hit, meaning passengers on every Lufthansa flight that departs from Germany will face a cancellation.

Lufthansa cabin staff last November staged the longest walkout in the company's history with a seven-day stoppage, during which 4,700 flights were scrapped and 550,000 passengers were unable to fly.

Just this summer, the airline at last reached an agreement with cabin crew, ending the two-year labour dispute that impacted hundreds of thousands of passengers.