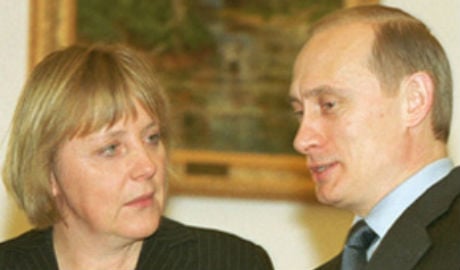 Angela Merkel, here with Putin in 2012, excelled at Russian as a student. Photo: Kremlin.ru
Unlike her one-time partners on the global stage, George W. Bush, Tony Blair, Jacques Chirac and Silvio Berlusconi, Merkel is still in power and running for another four-year term.
During her reign, she has taken centre stage in Europe's debt turmoil and refugee crisis, sparred with Russia over Ukraine and now, after Donald Trump's election, is being widely hailed as the torch-bearer of western liberal democracy.
With a doctorate in quantum chemistry, Merkel, 62, is known for a methodical and pragmatic approach to problem-solving, rather than for soaring oratory or big-vision statements.
Seemingly devoid of vanity and indifferent to the trappings of power, she lives in a Berlin flat with her media-shy scientist husband Joachim Sauer, shops in a local supermarket and spends holidays hiking in the Alps.
Germans seem to like it that way, given how past ideologues have plunged the country into catastrophe, and have re-elected “Mutti” (Mummy) twice since 2005.
Merkel's image as a reassuring leader was upturned last year when she took the unusually bold step of throwing open German borders to an influx of refugees from Syria, Iraq and other conflict zones.
The biggest gamble of her political life won her praise from grateful asylum seekers who tearfully cheered “Mama Merkel”.  But it also fuelled a surge in racist hate crimes and rightwing populism, angered Merkel's coalition allies and saw her isolated within the European Union.
Even if the 2015 influx of almost 900,000 migrants spelt Merkel's biggest domestic crisis so far, she has since seen her approval ratings recover to around 60 percent as new arrivals have tapered off.
Despite the political damage, she heads into the 2017 campaign season as the strongest candidate, with no serious rival for the top post or likely challenger in her own conservative ranks.
Merkel was born Angela Dorothea Kasner in 1954 in the port city of Hamburg, but within weeks her father, a Lutheran clergyman, moved the family to a small town in the communist East, at a time when most people headed the other way. Seven years later they were living behind the Wall.
Biographers say life in a police state taught Merkel to hide her true thoughts behind a poker face. Like most students, Merkel joined the state's socialist youth movement, but she rejected an offer to inform for the Stasi secret police while also staying clear of risky pro-democracy activism.
The best student in her class, she excelled in maths and Russian, which would later help her keep up the dialogue with President Vladimir Putin, who was a KGB officer in Dresden when the Wall fell in 1989.
During that momentous upheaval, the 35-year-old Merkel was working in a Berlin laboratory but quickly joined the nascent group Democratic Awakening. The group merged with the Christian Democrats of then chancellor Helmut
Kohl, who fondly if patronisingly dubbed Merkel “my girl”.
Merkel's mentor was not the last politician to underestimate her and pay the price.  When Kohl became embroiled in a campaign finance scandal in 1999, Merkel openly urged her party to drop the self-declared “old warhorse”.
The bold move kicked off her meteoric rise as youngest-ever and first female German chancellor in 2005.
In a party dominated by southern Catholic men, the twice-married, childless woman from the communist East was and remains an outsider. As party leader she has remade the CDU, anchoring it in the political centre by pushing social policies, abolishing compulsory military service and scrapping nuclear power.
During the eurozone crisis, Merkel preached fiscal discipline and kept a tight grip on the nation's purse strings, soothing the angst of a thrifty populace fearful about its pensions.
Especially in southern Europe, Merkel has drawn open hatred as a puritanical “austerity queen” sometimes caricatured in Nazi garb.
Her image flipped with the refugee influx, when news weekly Der Spiegel portrayed her as “Mother Angela” with a nun's habit. With Brexit, the Trump election and the rise of rightwing populism across Europe, new challenges await.
Merkel would have preferred to deal with Hillary Clinton, but after the election of Trump, who has called her refugee stance “insane”, she promised him close cooperation — provided it is based on “democracy, freedom and
respect for the law and the dignity of man”.
In a world shell-shocked by Trump's election, many now see Germany's bland, cautious veteran leader as a beacon of hope. Oxford University's Timothy Garton Ash wrote that “I'm tempted to say that the leader of the free world is now Angela Merkel”.