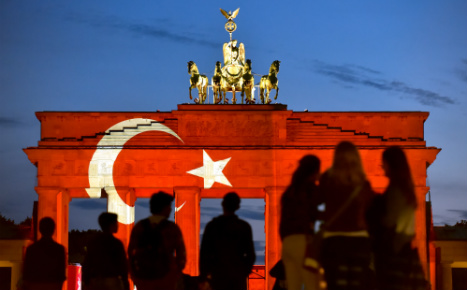 Berlin-Ankara relations have been badly strained by concerns over the Erdogan government's stance on civil rights, especially its sweeping crackdown since the July coup attempt against opposition lawmakers, journalists and other critical voices.

On Friday, Germany's Office for Migration and Refugees said that this year it had received 4,437 political asylum requests by the end of October, compared to 1,767 during all of last year from the EU-candidate country.

Numbers had steadily ticked up from 275 in July to 485 in October, it said, cautioning however that the rise could not be tied directly to the coup attempt, given the long time lags for asylum applications.

The German conservative lawmaker in charge of interior affairs, Stephan Mayer, nonetheless said “we must presume that the number of Turks who will request political asylum in Germany will rise further”.

He was critical of the foreign ministry for openly stating recently that Germany was open to granting refuge to Turkish citizens who need it.

But Mayer, a member of the conservative Bavarian CSU party, told the Funke media group: “We don't solve Turkey's problems by inviting all citizens who are critical of the regime to request asylum here.”

“That's not a favour we should do for President Erdogan. Because that's exactly what he wants – to get rid of the opposition.”

Developments in Turkey have a strong resonance in Germany, home to a three-million-strong ethnic Turkish population, the legacy of a massive “guest worker” programme in the 1960s and 70s.

Turkey declared a state of emergency following the July 15 failed coup, arresting tens of thousands in a crackdown which critics say has gone well beyond the alleged plotters to include anyone daring to criticise Erdogan.

EU and US officials have expressed concern over the arrests of opposition lawmakers and journalists as fears grow over Turkey's use of emergency laws.