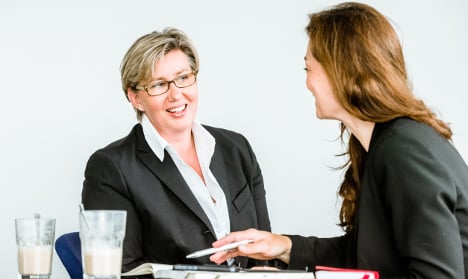 Photo: DPA.
Times Higher Education (THE) released the ranking of 150 universities on Wednesday, showing which ones worldwide have the best “employability” for students.
THE conducted a survey between April and July of this year, questioning one panel of management-level recruiters from 20 different countries and another panel of directors of international companies.
The first panel's participants voted on their 15 picks for universities that produce the most employable graduates in their countries. The second panel then looked at the list from the first group and voted on their top ten choices for both global and local universities.
SEE ALSO: These are Germany's top ten universities
Three German universities made it into the top 50 – and one even into the top ten.
1. Technical University of Munich (TUM)
Photo: DPA
This institute in the Bavarian capital placed eighth worldwide and was by far the best rated for Germany. It even ranked above prestigious Ivy league universities like Princeton, Columbia and Dartmouth – and was placed right behind Oxford at number seven.
“The Technical University of Munich is the only institution outside the US, UK or Japan to make it into the top 10,” the report stated.
TUM president Wolfgang Herrmann said the university's success is largely due to its great connections to companies like BMW, Siemens and Lindner.
“There is no other technical university that has such a rich economic environment and especially a technical economic environment [as] we do here in Munich,” Herrmann said in a statement.
It's reputation for creativity and scientific innovation also may give students a leg up when it comes to access to entrepreneurs and inventors: its scientists made 165 inventions in 2014, and 69 patents were submitted in 2015.
And for the past decade, TUM has positioned itself as “The Entrepreneurial University”, launching more than 800 startups by students and staff.
So while your diploma from this university may not have a name on it as well-known as some of the others on the list, rest assured that your chances for success are likely equal, if not greater on graduation day.
2. University of Munich (Ludwig-Maximilian University)
Photo: DPA
Also known as LMU, this university ranked 31 worldwide, beating out Ivy League institutes Dartmouth (34) and Brown (40).
It's one of the world's oldest universities, tracing its roots back to the 15th century, and its list of famous alumni and professors includes Werner Heisenberg and playwright Bertolt Brecht, as well as Pope Benedict XVI.
LMU was also picked as Germany's top university by US News and World Report last month.
THE commended LMU for its “strong commitment to teaching excellence” as a research institution, and for its “dedication to academic freedom”, referring to the White Rose rebellion when students and staff resisted Nazi ideology during the Second World War.
3. Goethe University Frankfurt
Photo: DPA
Frankfurt's leading academic institute came in at number 50 worldwide, beating out Cornell and the University of Chicago.
Named after Germany's most beloved writer, Johann Wolfgang von Goethe, the location in Germany's financial hub lends itself to global connections, as part of its “international campus” initiative.
THE notes that Goethe University is particularly well regarded for its medicine and physics programmes, as well as economics and business administration.
4. Heidelberg University
Photo: Heidelberg University Press Office.
Ranked number 56, Heidelberg University is the oldest of Germany's academic institutions, dating back to 1386, and it's also one of the oldest surviving universities in the world. It has a sizable international student body, making up about 17 percent of its more than 29,000 pupils.
Five German chancellors have attended Heidelberg – including Helmut Kohl, who oversaw German reunification – as well as influential thinkers like Hannah Arendt.
And to top it all off, the city of Heidelberg was named one of the most “inspirational” places in the world – perhaps therefore inspiring its graduates to master their most employable skills.
5. Humboldt University, Berlin
Photo: DPA
At number 61, this is Berlin's best bet for students looking to land a job in the bustling capital city after graduation.
As the institute of great minds like Karl Marx, Friedrich Engels and Albert Einstein, THE calls Humboldt “one of the most prestigious universities not only in Germany, but in Europe.”
“It has a world class reputation in arts and humanities fields… The institution's academic clout is evidenced by the fact that it has educated no fewer than 29 Nobel prizewinners,” THE wrote.
6. Frankfurt School of Finance and Management
Photo: DPA/Frankfurt School of Finance and Management
Perhaps it's not a surprise that a university dedicated to finance and business located in Germany's financial heart would have highly employable graduates.
At number 67, the Frankfurt School tied with the Hebrew University of Jerusalem. It's a fairly new institute compared to other German ones on the list, but its reputation has grown over the years.
German business magazine Wirtschaftswoche named it the fourth best German university for business administration last year, and also for the first time it was named among the top ten for business IT.
“Graduates of this programme are also best prepared for starting successful careers,” said professor Udo Steffens at the time, referring to the business IT programme.
7. Karlsruhe Institute of Technology (KIT)
Atmospheric aerosol researchers at KIT. Photo: DPA
This university in the southern state of Baden-Württemberg was ranked number 81.
Though only established in 2009, KIT already had a history of research before its founding, as it started from a merger of the University of Karlsruhe and the Karlsruhe Research Center.
Its predecessor, the University of Karlsruhe, produced Karl Benz – the inventor of what is considered to be the first practical motorcar. Another former student was Karl Ferdinand Braun, creator of the cathode ray tube used in televisions.
8. University of Göttingen The central library at Göttingen University. Photo: Ronald Schmidt / SUB Göttingen
At number 92, Göttingen in Lower Saxony still makes it into the top 100 worldwide, and is “regarded as one of the most prestigious universities of Germany,” THE writes.
More than 40 Nobel Prize winners have studied, taught or conducted research at the university, and its prestige has helped to give the town the moniker of “city of science”. The university maintains close ties to both the Max Planck Society for the Advancement of Science and the Gottfried Wilhelm Leibniz Scientific Community. It also has one of the largest libraries in Germany.
It was actually founded in 1734 by British King George II, elector of Hanover, and Napoleon Bonaparte once said that Göttingen belonged “to the whole of Europe”.
9. Technical University of Berlin
Chancellor Angela Merkel and Queen Elizabeth II at a demonstration at TU Berlin last year. Photo: Pool AP/DPA
This research university was ranked 96 worldwide and offers a “wealth of renowned programmes” within the technical industry, including mathematics, natural sciences, engineering, and computer science, according to THE.
It's also home to two innovation centres from the European Institute of Innovation and Technology, and its science library of three million books and journals gives scholars and guests unlimited access.
10. Free University of Berlin (Freie Universität) Philological Library of Freie Universität Berlin, designed by Lord Norman Foster, and opened in 2005. Photo: Freie Universität Berlin
Freie Universität (FU) was established in 1948 at the beginning of the Cold War in West Berlin, due to the fact that Humboldt was located over in the Soviet-occupied East Berlin.
“Truth, justice and freedom remain the university's core values with these words imprinted on the university seal,” THE notes.
It offers partnerships with universities around the world and has seven international liaison offices in  Beijing, Brussels, Cairo, Moscow, New Delhi, New York, and Sao Paulo.
And according to THE, with 30 percent of its professors being women, it's at the “forefront of German education institutions when it comes to gender representation.”

Every year around 53,000 young people complete what’s known as a Voluntary Social Year (FJS) in Germany. It can be a great opportunity to learn new skills, improve your German and get a sense of direction in your career. Here’s what you need to know.

What is a Voluntary Social Year?

A Freiwilliges Soziales Jahr (FSJ), or voluntary social year, is a way for young people to find direction and contribute to society after leaving secondary school. It has its roots in Philadelphischer Dienst, a program set up in 1962 to provide young women with an alternative to the military service undertaken by the men.

Generally, people doing an FSJ will choose a voluntary placement lasting anywhere between six and eighteen months. These placements can be immensely varied, but generally fall under the umbrella of the social sector, such as working in a care home, with refugees, in a hospital or with children from difficult family backgrounds.

Over the course of their placement, volunteers get a small allowance for food and transport known as “pocket money”, and sometimes also have access to accommodation or receive a bit of money towards their accommodation. They generally receive hands-on training from the institution they choose to do their FSJ with as well as being integrated into the culture and work life that exists there.

The hours you volunteer, as well as other aspects of the placement like the hours and remuneration, will generally be determined by the institution offering the placement.

Who’s eligible to apply for one?

Generally, anyone under the age of 27 who has completed their final year of secondary school is eligible to apply for an FSJ – though different institutions may have different requirements. 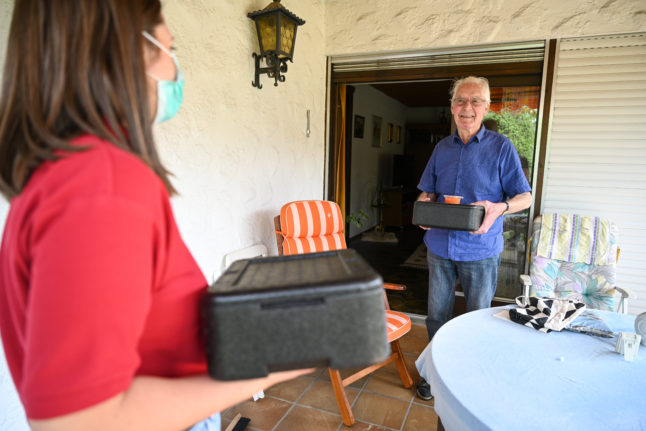 Usually, the institution offering the placement will assist third-country nationals with their visa application.

However, while EU students have an automatic right to live and work in Germany, they will have to prove they can support themselves for the duration of the placement – so it’s a good idea to build up some savings.

How do I find a placement?

Numerous online search portals are around to help connect potential volunteers with placement listings, while you can usually narrow sound by the sector you want to work in and the location.

A couple of examples of these are the website Ich will FSJ and Ein Jahr Freiwillig, where you can find numerous positions to apply for. It can help narrow it down if you know what kind of place you want to volunteer for and where in Germany you’d most like to live.

Once you’ve found your placement, you’ll need to send an application, which normally includes details or your school grades, a letter of motivation, and any relevant experience. Be sure to discuss the specific requirements for applications with the institution you want to apply to, as these can often vary from place to place.