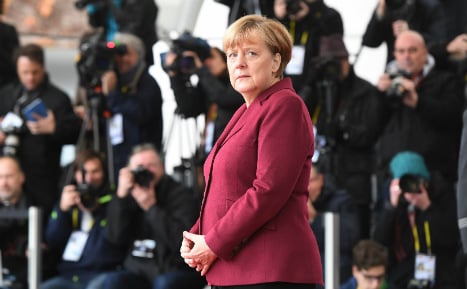 Merkel has run for re-election twice now. But this is the longest she has left it before announcing her decision and the delay has kept the German media on tenterhooks.

On Friday broadcaster N-tv reported that the Christian Democratic Union (CDU) leader will give a press conference on Sunday where she will address the issue.

Here’s why we believe she will run again.

It may seem like Merkel has been on the internal political stage since the dawn of time, but she is still only 62 years old.

The trend for hip, young leaders such as Tony Blair and Barack Obama also seems to be going out of vogue.

In the USA, the 75-year-old Bernie Sanders was pipped to the Democratic nomination for this year’s elections by the 69-year-old Hillary Clinton, who was beaten to the presidency by the 70-year-old Donald Trump.

The UK’s new Prime Minister Theresa May is slightly younger than Merkel at 60, while France’s François Hollande is also 62.

2. She loves her job

In an interview with a popular YouTube star last year, Merkel spoke of her passion for the work she does.

Asked by LeFloid what she enjoys in life, she answered “my job, and the opportunity to work through the day.”

This response might have come before the refugee crisis took its toll, but it was evident from the interview how much the biggest job in Germany means to the pastor’s daughter.

The thought of how to fill her days away from politics is probably not a pleasant one to the renowned workaholic.

3. Her party needs her

Despite public discontent with her refugee policies, 59 percent of Germans think Merkel should run again, a survey by Forsa last week showed.

As the far-right Alternative for Germany (AfD) have rode a rising tide of xenophobia in Germany, they have managed to score surprising election success at the state level, often at the expense of the CDU. The AfD celebrate their elections result in Berlin in September. Photo: DPA

Merkel has become a hate figure for the far-right, who regularly denounce her as a a Volksverräterin (traitor to the people). But her unfussy, humble style still appeals strongly to the mainstream of German society.

Recent votes in other countries have cast doubt on the accuracy of polling, but if it is to be believed in Germany, the CDU could not put a more popular candidate for Chancellor forward than the woman already there.

4. Her experience is needed more than ever

Merkel has a strong sense of duty. In speeches on the refugee crisis she often repeats the moral case for allowing hundreds of thousands of Syrians to travel unregistered into the country.

It is probable that this same character trait will motivate her to stay on as Europe’s most important leader, due to the uncertain future that lies ahead for the continent.

After Britain voted to leave the EU in June, Merkel described it as “a cut into Europe.”

With a Trump presidency calling the transatlantic alliance into question, and the far-right in with a shot of winning power in France, the Chancellor likely believes that her calm, moderating qualities are still needed on the international stage. Speaking in Berlin on Thursday, US President Barack Obama said that if he were German he would vote for Merkel. It was just one of a string of compliments the US President has showered upon his counterpart recently.

Why would he keep talking her up if he didn’t think she was going to run? It certainly doesn't hurt Merkel having the popular Obama praise her days before she makes her big announcement.

6. A close ally gave the game away

“She will run for the post of chancellor,” Norbert Röttgen told US television channel CNN earlier in the week.

“She is absolutely determined, positioned and ready to contribute to reinforcing the international liberal order,” he said.

Röttgen is one of the most senior members of Merkel's CDU. People within the party deny that he is in the know on Merkel's intentions. But such an emphatic statement from a party leader can only really mean one thing.

7. Opponents within her ranks have surrendered

Many media outlets have speculated that Merkel has held off on her announcement because the conservative Christian Social Union (CSU), the Bavarian sister party to her CDU, withheld their support.

Further to the right than the CDU, the CSU have fought Merkel over refugees, demanding that she introduce an upper limit on the number Germany accepts, which she has point blank refused.

But the CSU fear the possibility of a left-wing coalition taking power and have made peace with her in recent weeks.

At the end of October, Gerda Hasselfeldt, leader of the CSU in the Bundestag (German parliament), said that “if Angela Merkel wants to stand for Chancellor again, she has my full support.”

8. Even some of the opposition want her to run

German politics can be a surreal place sometimes. Opposition parties are supposed to be there to fight the government. But sometimes it seems that Merkel’s credentials as Chancellor are so evident that even her supposed rivals concede them.

That certainly happened earlier this month when veteran Green party leader Winfried Kretschmann, said she should run for a fourth term.

“I don't know anyone who could do a better job than her,” gushed Kretschmann, the popular minister-president of industrial powerhouse state Baden-Württemberg, who has previously said he prayed for Merkel.