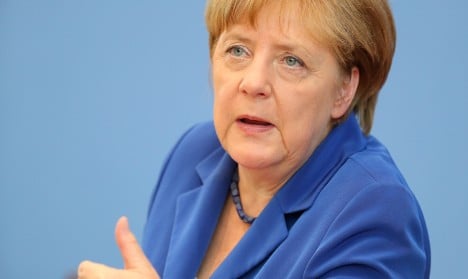 “I have always been strongly engaged for a conclusion of a trade deal with the United States. We have made a lot of progress on the negotiations, but it will not be concluded now,” she said, following talks with US President Barack Obama on his farewell tour of Europe.

But the talks became bogged down amid widespread belief in Europe that the deal would undercut the 28-nation bloc's standards in key areas such as health and welfare.

President-elect Trump also railed against free trade pacts during his election campaign, claiming they were taking jobs away from the American workforce.

Some of the sharpest criticism of TTIP though, came from Germany, where around 160,000 rallied in seven cities in September against the deal, as well as against a separate free trade deal with Canada, called CETA.

Exporters have been in favour of the deal as it promised lower tariffs, less red tape and a wider base of consumers for their goods.

But in Europe, consumers feared it would ride roughshod over the EU's labour market and environmental standards, and would bring about more outsourcing which would lead to job losses.

There have also been concerns over plans for a special court to hear cases by companies against governments over breaches of regulatory issues, which opponents see as giving firms a veto over public policy.