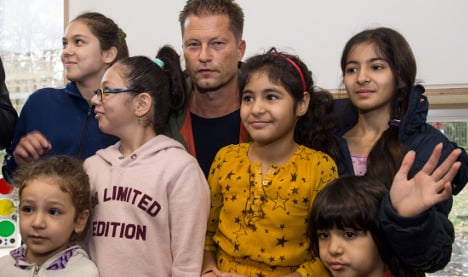 The study released on Tuesday was conducted by government agencies and research institutes, and surveyed more than 2,300 adult refugees who arrived in Germany between 2013 and early 2016.
The participants were asked about their experiences during their flight from their home countries, with 15 percent of women and 4 percent of men saying that they had experienced sexual abuse.
More than half also said they were economically exploited or deceived, and around 40 percent of men and women said they had been imprisoned while trying to leave. Around one-quarter to one-third of respondents said they had survived a shipwreck on their journey.

A boy and his family after arriving by boat to a beach of the Greek island of Lesbos. Photo: EPA.
Not only were the physical and emotional costs of fleeing to Germany great, but so was the financial cost. Those who came directly to Germany, without settling into a transit country first, spent on average €7,137 on transportation, shelter and on paying smugglers. Those who came to Germany from a transit country spent €5,231 on average.
Half of refugees had to spend their savings on the trip – which lasted on average 35 days for those coming directly from their home countries – while others sold off assets or worked odd jobs to raise the money.
3. Refugees are more democratic than Germans
One of the findings that the report was eager to point out was how refugees, most from countries with very poor democratic records, valued democracy a bit more than Germans in many instances. Slightly more refugees believed democracy was the best form of government, whereas slightly more Germans said they wanted a “strong leader” who didn’t worry about parliament or elections.
And there was a ten percentage-point difference between Germans and refugees when it came to what people saw as important aspects of democracies: more refugees thought that governments should support the poor and tax the rich, and more also believed that citizens’ rights should protect them from government oppression.

4. Ideas about gender roles are nearly the same

Another finding that may have surprised Germans who often see refugee women as more repressed was that Germans and those seeking asylum from war-torn countries have nearly equal ideas about gender roles.
For example, there was a slight difference overall when it came to respondents who believed parents should prioritize their sons’ educations over their daughters’, but this difference nearly disappeared when looking only at male respondents: 19 percent of refugee men and 18 percent of German men thought parents should care more about their son’s development.
Still, more refugees thought women earning more than their husbands would inevitably lead to problems: 29 percent, compared to 18 percent of Germans who felt the same.
5. Most refugees feel welcome in Germany
Chancellor Angela Merkel visiting an asylum facility in Berlin. Photo: DPA.
The increased number of attacks on refugee homes and growing tensions between far-right groups and asylum seekers in some communities have called into question the German government’s goal to provide a ‘welcoming’ culture.
Still, the report showed that refugees do mostly feel at ease in their new country. When asked about how welcome they felt during different stages of their arrival, the vast majority of refugees reported feeling either mostly or entirely welcome.
But while refugees who came in 2013 showed an improvement in their feelings of belonging over the years, those who arrived between 2014 and 2016 said that they felt less welcome over time.
6. 95 percent want to stay in Germany forever
The report notes that perhaps the feeling of being accepted has contributed to the overwhelming majority of refugees saying that they would stay in the country forever: 95 percent gave this answer.
Of those who said they did not feel welcome at all in the country, 88 percent said they want to stay.