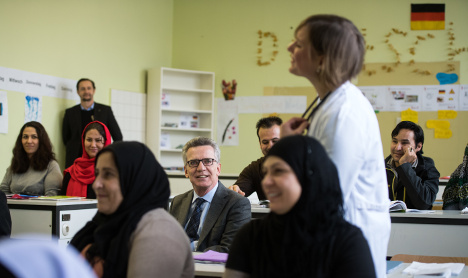 The study released on Tuesday was conducted by government agencies and research institutes, and surveyed more than 2,300 adult refugees who arrived in Germany between 2013 and early 2016.

The report noted that refugees showed a “high degree of agreement with fundamental democratic values”, and in some cases showed that asylum seekers were slightly more democratic than Germans: 96 percent of refugees said that a democracy was the best form of state government, compared to 95 percent of German citizens who agreed in a separate World Values Survey.

And while 21 percent of refugees agreed that “people should have a strong leader who does not have to deal with parliament and elections”, 22 percent of Germans agreed with this statement.
Nearly 60 percent of Germans agreed that “experts and not the government should decide what is best for the country” while 55 percent of refugees agreed with this statement.
When asked about what the most important aspects of a democracy should be, 96 percent of refugees said that free elections were important, compared to 92 percent of Germans. An equal portion of refugees and Germans believed democracies should also entail equal rights for men and women: 92 percent.
There was a noticeable difference though when it came to the question of the role of the government: 93 percent of refugees compared to 83 percent of Germans said that democracies should create citizens’ rights to protect people from “government oppression”. And 81 percent of refugees compared to 71 percent of Germans said that the government should “tax the rich and support the poor”.
In other words, refugees were more supportive of governments protecting citizens’ rights and helping the poor than Germans.
There was also a difference when it came to the role of religious leaders in democracies. A minority of refugees, 13 percent, said religious leaders should “ultimately interpret the laws”, compared to 8 percent of Germans.
Ideas about gender roles similar
In terms of gender roles, the report noted that there were “small differences between refugees and Germans”: 86 percent of refugees compared to 72 percent of Germans agreed that “having a job is the best opportunity for a woman to be independent”. The difference was even more stark when looking at only male respondents: 85 percent of refugee men said having a job was the best way for a woman to be independent, compared to 62 percent of German men.
When asked whether parents should prioritize their sons’ education over their daughters’, 18 percent of refugees and 14 percent of Germans said yes. German and refugee men were even closer in their answers: 18 percent and 19 percent respectively agreed.
But when asked about whether women earning more than men causes problems, there was a bigger difference: 29 percent of refugees and 18 percent of Germans said this would inevitably cause problems.
'Fear of war' biggest driver of seeking asylum
The survey also asked the refugees what had driven them to flee their homelands. Respondents could pick more than one option from a list. Most (70 percent) said that fear of violent war or conflict had brought them to the Bundesrepublik. Another 44 percent said persecution was a factor, followed by “horrible living conditions” (39 percent), discrimination (38 percent) and fear of forced recruitment (36 percent).
About one third said that the “general economic situation” of their country was one factor which caused them to leave.
Refugees were also asked to describe which factors led them to choose Germany as a place to seek refuge. Seventy-three percent said it was because of the country's attention to human rights, 43 percent said it was the educational system, 42 percent said it was because they thought they'd feel welcome and 26 percent said it was because of the welfare and social benefits.
About one-fourth said Germany's economic situation was also attractive, and about one in ten said it was happenstance that they ended up in the country.
Refugees are highly 'education-oriented'
Another observation of the report was that the refugees had “high educational ambitions”.
Most refugees (58 percent) had spent at least ten years studying or doing vocational training in their homelands, compared to 88 percent of Germans.
But nearly half (46 percent) want to pursue the equivalent of a high school diploma in Germany, while 66 percent said they are aiming for a professional degree.
“This result indicates that the educational structure of refugees will strongly change,” the report states.
“However it would be rash to conclude from this to what extent refugees will actually go to educational institutions or acquire degrees. The timeline is also open: many refugees want to initially work and then later invest in education and training.”
The report also notes that there are certain obstacles in the way of ambitious asylum seekers, including still having to go through the asylum application process and learning German.
The overwhelming majority – 90 percent – of refugees had no knowledge of German when they arrived in the country, but their level of comprehension rose quickly once they had settled in, according to the report.
About one in five (18 percent) refugees had “good” or “very good” language levels within less than two years, according to their own self assessments. Another 35 percent reached intermediate levels within this time period.
Of those who had been in the country longer than two years, one third had good or very good German skills and 37 percent had intermediate levels.

Separately, most refugees had taken some form of class to acquaint themselves with the country and language. About one third of those surveyed had already taken an integration course with BAMF, while 38 percent had taken an unspecified language course. Another roughly one third had not or could not yet take a language class.

The report seemed optimistic that refugees' level of ambition would ultimately push them towards further education.
“The knowledge of German is often still too low for refugees to go to educational institutions. Against this background, it can be estimated that their participation in education will still grow.”