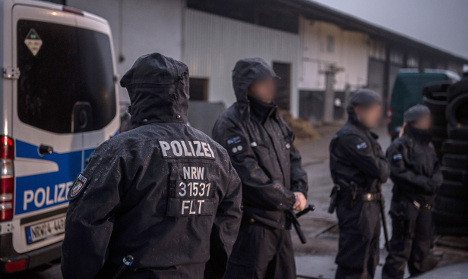 Police in Pulheim, North Rhine-Westphalia, during a raid. Photo: DPA.

The group, called The True Religion (Die wahre Religion), is now also banned, Interior Minister Thomas de Maiziere said. German officials consider the group to be unconstitutional and against the principle of having understanding among different nations, according to DPA information.

“Across the country, jihadist Islamists came together in this group named The True Religion,” de Maiziere said at a press conference on Tuesday.

“Under the pretext of promoting Islam, under the pretext of supposedly harmless distribution of translated versions of the Koran that took place in pedestrian zones, hate messages were propagated and young people radicalized,” added the interior minister.

The organization's controversial programme called “Lies!” distributes copies of the Koran in German. But experts say the translation is a particularly strict version from the original Arabic text.

Germany’s domestic security agency BfV accuses group members of being sympathizers with armed jihad and terror attacks, claiming they had built up a nationwide recruitment network and reserve of jihadists.

De Maiziere noted that after participating in the Koran distribution campaign organized by the group, “140 young people travelled to Syria and Iraq where they joined the fight with terrorist groups”.

Tuesday's ban is the biggest such prohibition in Germany targeting Islamist groups after another organisation called “The Caliphate State” was outlawed in 2001.

De Maiziere stressed that Tuesday's action is not targeted against the general distribution of translated Korans, but against those who “abuse religion and who use it as a pretext to spread extremist ideology and to back terrorist organisations”.

“The 140 departures by the group's activists speak for themselves,” the minister said.

The raids took place beginning at about 6.30am on Tuesday morning with searches through apartments and offices of suspected radical Islamists.
In Hesse there were around 65 searches, including 15 in Frankfurt, and around 35 more searches each in Bavaria and North Rhine-Westphalia. Police in Lower Saxony raided more than 20 properties, and in Berlin investigators searched through around 20 locations.
There were also 15 raids in Baden-Württemberg, and the states of Schleswig-Holstein, Rhineland-Palatinate and Hamburg each had five raids. There was one conducted in Bremen.
“The message to the radical Islamist scene is clear: we do not tolerate fanatics who try to radicalize young people and send them to jihad,” said Peter Beuth, the interior minister for Hesse state, where some of the raids took place.

“By banning this organisation, a major source of radicalization has been eradicated nationwide. Those who spread hate messages can't hide behind freedom of religion, the Interior Ministry has underlined this with the ban today,” he added.

The BfV estimates that the number of radical Islamists in Germany totaled about 9,200 as of the end of October and continues to rise. The number of potential Islamist terrorists is estimated to be 1,200.

As of last month, around 870 people had travelled from Germany to Isis battlegrounds in Syria and Iraq, about 20 percent of them women, according to security agencies. 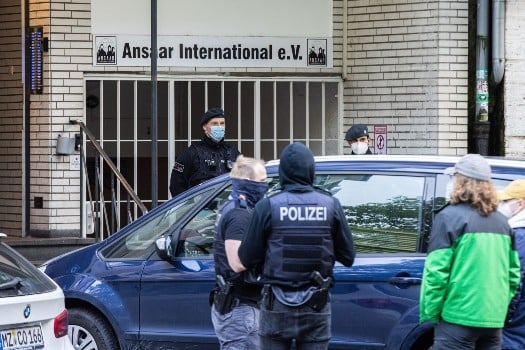