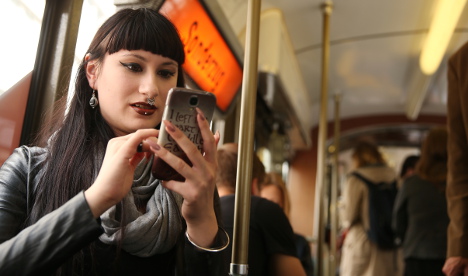 As much as it can become a pain to sit through adverts before getting to the content you really want online, sometimes there can be advantages.

At least that’s the idea behind the app by startup Welect, which offers users in Düsseldorf free bus and train tickets in exchange for watching four 20-second video advertisements. Users also get to choose which ads to watch, from a limited selection.
That means passengers could be saving themselves the €2.60 it would normally cost them for a regular ticket.
Already more than 20,000 people have downloaded WelectGo since the app became available at the end of October, according to Der Westen.

“We didn’t expect this kind of success, we thought it would be around 1,000 tickets by the end of the year,” said Welect co-founder Philipp Dommers.

But now the small firm needs to find enough advertisers wanting to sell ads to meet the demands of the tickets bought.
During a practice test of the app last week, there were only four videos on offer: one for a perfurme shop and three from an energy company. Three hours into the test, the daily ticket allotment on the app was gone.
“The advertisers can indicate how often a customer may be offered a certain video spot. Therefore it can happen that your neighbour at the transit stop still receive a free ticket, but you won’t be offered any more,” Dommers explained.
The deal has also been beneficial for Düsseldorf’s local transit company, Rheinbahn, because they’re selling tickets to people who may not have otherwise gotten on a bus or train, a Rheinbahn spokeswoman told Der Westen.
Welect is also now in talks with other cities in Germany and the Netherlands to expand the app’s reach.