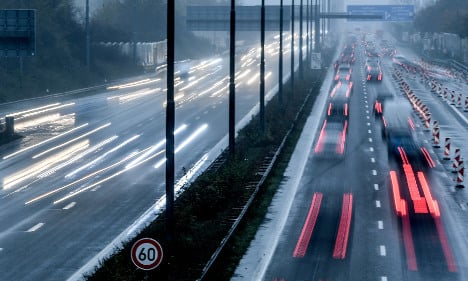 A section of the Autobahn near Cologne. Photo: DPA.

Finance Minister Wolfgang Schäuble from Chancellor Angela Merkel’s conservative CDU party has put forth a plan to partially privatize the Autobahn network of roads across the country, according to a report by Der Spiegel on Saturday.

His plan would involve selling private companies a share of up to 49.9 percent in a national company that would be in charge of construction and maintenance for the Autobahn. The company would be financed through existing tolls on trucks travelling the Autobahn, and could potentially get a boost from a new toll plan for private drivers, according to Spiegel.
The suggestion ignited a wave of outrage over the weekend with the Social Democrats, Greens, Die Linke (Left Party) and industry groups criticizing the proposal.
According to Spiegel information, Schäuble introduced the idea to the Bundestag’s (German parliament) budget committee last week, and a draft could be on the table soon.
In mid-October, state and federal representatives agreed that that the German government should create a national company to finance, plan and construct the country’s motorways.
Currently money for the Autobahn comes from the federal government, but individual states are responsible for planning and construction within their borders. Changing this structure would require a reform of the country’s constitution.
Schäuble, however, would not be able to get the constitutional reform that his plan requires without the support of his party’s coalition partner, the Social Democrats (SPD).
“There will be neither a privatization of streets, nor a federal motorway company,” said Beate Baron, spokeswoman for the Economy Ministry, explaining the position of minister Sigmar Gabriel, who leads the SPD.
Even the CDU’s budget expert, Eckhardt Rehberg, was sceptical about the concept.
“I personally don’t see the necessity of involving private businesses in the federal government’s Autobahn company,” Rehberg told publishing group Funke Mediengruppe.
Left Party deputy leader Jan Korte said that if the Autobahn were transferred to the private sector, the “privatization craze” will have gone too far.
“Billions will be given to banks and insurance companies as gifts, citizens will have to pay for it,” said Korte.
German automobile club ADAC said that it does not see the necessity of private investment “against the background of secure, promised investment of capital resources for the coming years”.
The Green party was critical of the involvement of big business in a public system.

“We don’t want the Autobahn to become a profit-oriented project for banks and insurance, off of the costs to drivers,” said Green party politician Oliver Krischer.

“Taxpayers have already paid for the Autobahn.”
The Federal Audit Office found in a study in 2014 that many public-private partnerships in the transportation sector are often more expensive than conventional construction plans.
A new toll for private drivers on the Autobahn – which is moving closer towards realization after a breakthrough in talks with Brussels – is also set to give revenues a boost.