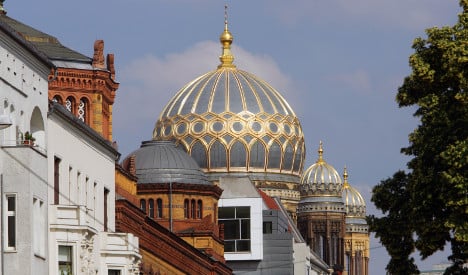 Berlin's New Synagogue, which was targeted during Kristallnacht in 1938. Photo: DPA.

A Berlin neo-Nazi group posted a map of addresses on Facebook of around 70 Jewish establishments on the 78th anniversary of the 1938 so-called Kristallnacht pogrom.

“A criminal complaint was filed over suspicion of incitement,” a police spokeswoman told AFP, adding that Berlin officers were investigating.

The Facebook post had the caption “Jews among us!” and showed a map with addresses of nearly 70 synagogues, day care centres, schools, monuments, businesses, restaurants and graveyards, Tagesspiegel reported on Wednesday.

This Wednesday, November 9th, marked 78 years since Nazi paramilitary SA members and German civilians launched a pogrom attacking Jewish stores, buildings and synagogues. Also known as the Night of Broken Glass, the pogrom killed at least 91 Jewish citizens and destroyed thousands of shops and synagogues
The Facebook post, first observed by the group Mobile Counsel against Right-wing Extremism (MBR) also stated: “Today is such a nice day!”
MBR and Green party MP Volker Beck informed all Jewish establishments that were on the list.
MBR project leader Bianca Klose told Tagesspiegel that the neo-Nazi group “regularly shares openly racist and anti-Semitic messages, predominantly of international political events.”
‘A disquieting feeling’
One of the addresses listed was Berlin’s Holocaust memorial – formally known as the Memorial to the Murdered Jews of Europe.
“We were very shocked by this and find it intolerable,” Holocaust memorial foundation spokeswoman Sarah Friedrich told The Local. She said that the foundation did not plan to hire more security for the monument.
“The fact that it was on the day of Kristallncht is troubling… It feels like how things were in the 1930s when Jewish people were put on a list and that is a disquieting feeling. We hope that nothing bad happens from this.”
Beck told Tagesspiegel that he was disgusted by the post and pledged his solidarity with the Jewish community.
“I see this as an attack against our open society. This is an attack against us all,” Beck said.
Still, he said that it would be hard to punish the group for their posting because it may not amount to a crime.
“Our first legal assessment shows that this post however does not fulfill the requirements for the crime of incitement of hatred.”
Police injured during right-wing extremist march
Meanwhile in Jena, Thuringia, a group of some 60 right-wing extremists marched on Wednesday in a demonstration that turned violent, police reported.
An estimated 1,500 counter-protesters also demonstrated. Three police were injured during the demonstrations, one of whom was hit with a piece of wood and kicked by a counter-protester.
Police also used pepper spray to hold back crowds. Officials said they were able to prevent a large clash between the two groups.
With DPA/AFP