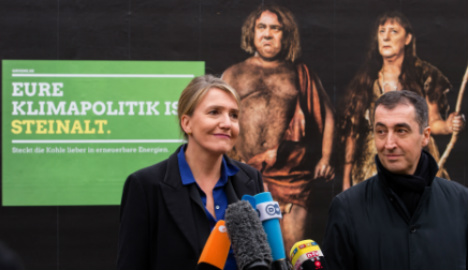 Politicians in both parties have flirted with what was long an unthinkable scenario — that the chancellor’s business-friendly CDU could one day form a coalition with the left-leaning environmentalists to rule Europe’s top economy.

Veteran Greens leader Winfried Kretschmann, 68, caused a stir this month when he said Merkel, who is yet to formally declare her candidacy for next September’s polls, should run for a fourth term.

“I don’t know anyone who could do a better job than her,” gushed Kretschmann, the popular state premier of industrial powerhouse state Baden-Wurttemberg, who has previously said he prayed for Merkel.

The party elder’s praise for Merkel sparked disquiet and embarrassment in Green ranks that is likely to flare again when their “realo” (realist) and “fundi” (fundamentalist) wings seek common ground at a party congress starting Friday.

One of the Greens’ co-leaders, Simone Peter, curtly shot back that “we want to end Merkel’s ‘grand coalition’ and we certainly won’t be making any hasty determinations on who should be chancellor”.

Joining the CDU is still a controversial notion but “no longer a bogeyman for the Greens”, said Lothar Probst of Bremen University, adding that Greens voters, with above-average incomes and academic qualifications, have arrived “in the middle of society”.

A Spiegel magazine columnist mocked the once-radical party, saying that its ecologically mindful baby-boomers may “soon have all the progressive aura of lambskin slippers”.

Sunflowers, peace signs
Many Greens lean toward seeking a so-called “red-red-green” coalition with two other leftist parties as a chance to return them to power after over a decade on the opposition benches, with voter support now at around 12 percent.

Others argue it’s best to shut up about possible future power games and focus on core policies such as ending coal power, boosting sustainable farming and scrapping a planned transatlantic trade deal.

Nonetheless, the fact that a power pact with Merkel’s CDU is now thinkable speaks volumes about how both parties, and German society, have changed since the Greens first entered mainstream politics in the 1980s.

When “Die Grünen”, pioneers among Europe’s ecologist parties, were first voted into West Germany’s parliament, their long-haired MPs stunned the sombre chamber by flashing peace signs and handing out sunflowers.

Born out of the 1960s and 70s pacifist and anti-nuclear protest movements, some of the youthful activist-politicians enjoyed provoking their suit-wearing elders by putting their sneaker-clad feet on the tables.

The Greens underwent a radical evolution when they served in government from 1998-2005 as junior partners to the centre-left Social Democrats (SPD) under chancellor Gerhard Schröder.

Ironically it was under the Greens’ foreign minister Joschka Fischer, once a street protest militant, that Germany broke with its post-World War II taboo and sent troops abroad, to Kosovo and then Afghanistan.

Many of the Greens’ once-radical ideas have become mainstream in Germany, from promoting gay rights to ending military conscription to opposing GM crops and fracking.

Her open-door policy for refugees was cheered more by Greens voters than her own often sceptical CDU rank-and-file.

After the 2013 election, Merkel’s victorious conservatives and the Greens held exploratory talks for a coalition, before Merkel instead opted for a grand coalition with the SPD.

At the time the environment minister Peter Altmaier, now Merkel’s chief of staff, said the chances of working with the Greens had risen “from theoretical to conceivable”.

Today many Greens leaders, slowly entering campaign mode, stress their differences with Merkel – though most hesitate to slam the door altogether on a future coalition.

Peter said the Greens would push for “a political change in our country” and vowed that “we will deal critically with Merkel’s policies”.

The Greens also see a huge stumbling block to a coalition in having to also join forces with Merkel’s arch-conservative Bavarian allies the CSU, who have railed against mass migration.

That animosity goes both ways – CSU chief Horst Seehofer said last week that the declared mission of the conservatives must be to “stop the leftist front” from seizing power.