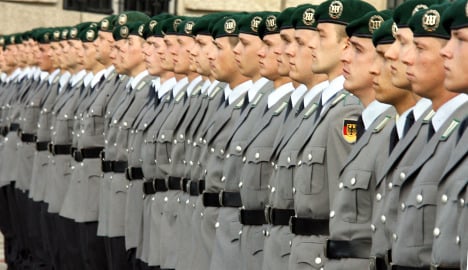 The Bundeswehr currently has a record number of soldiers under the age of 18 since Germany did away with conscription in 2011, according to figures from a Die Linke (Left Party) inquiry to the Defence Ministry, seen by Die Welt.

Since Germany ended conscription five years ago, the Bundeswehr has struggled to attract new recruits. In recent years, as the country has sought to play a larger military role internationally in efforts like the fight against Isis, the defence ministry has hoped to boost numbers through increased spending and perks for soldiers.

Despite the force now being a purely voluntary one, a report in August showed that hundreds of soldiers have requested to leave the army in the past two years.

Germany allows 17-year-olds to join the Bundeswehr with parental permission, though they are limited to using weapons during training, and are not sent on international missions.
According to NGO Child Soldiers International, a large majority of countries worldwide only recruit people over 18 into their militaries. Germany still holds on to an exception under international law that allows those under 18 to volunteer as long as it’s not for violent conflicts.

In 2014, the UN Committee on the Rights of Children told Germany that it should raise its recruitment age.

The Bundeswehr has defended its recruitment of 17-year-olds, insisting that weapons training is done under strict supervision.
The military also want to give youth the opportunity to get training without having to wait until they are of legal age, and thus get a head-start on other job starters of the same age.
“This takes into account the principle of freedom of career choice,” the Bundeswehr told Die Welt, adding that the military was not only a secure career, but also a “meaningful employer with a great potential for personal and technical development.”

“The Bundeswehr’s recruitment of minors must finally come to an end.”

Müller also criticized the German military’s promotion materials aimed at children and teens, which he said had increased dramatically since the end of conscription. For example, the Bundeswehr has launched a YouTube series in the style of a reality show called “The Recruits”.

The Left Party plans to bring forth on Thursday a proposal in the German parliament (Bundestag) to halt the recruitment of underage soldiers and their weapons training.