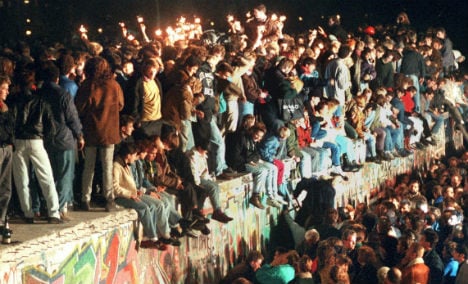 Berliners celebrate on top of the Wall in November 1989. Photo: DPA

The 155 kilometre wall was first erected on August 13th 1961 in order to separate East Berlin from the west of the city. At least 140 people died due to the barrier.

A symbol of not just German but also international importance, the Berlin Wall became one of the focal points of the Cold War. From its inception in 1961 to its eventual demise on November 9th 1989, politicians made iconic speeches in front of the concrete barricade separating West Berlin from the surrounding Soviet-allied East Germany.

Here are ten of the most well-known quotations about the Berlin Wall:

1. “Nobody has the intention of building a wall.” – GDR head of state Walter Ulbricht, East Berlin, June 15th 1961 Walter Ulbricht at the press conference where he uttered the fatal words. Photo: DPA

The East German leader was arguing at the time that West Berlin should become a “free city” rather than a zone occupied by the Western powers, meaning that it should be made neutral.

A reporter at the press conference asked Ulbricht whether the formation of a “free city” would mean creating a state boundary at the Brandenburg Gate, thus officially dividing the two cities.

He responded by suggesting that Westerners wanted East Germany to build a wall, saying “niemand hat die Absicht, eine Mauer zu errichten” (nobody has the intention of building a wall). He protested that East German builders were far too busy constructing houses.

Ulbricht’s response was surprising because no one had suggested the idea of an actual wall before.

Mayor Willy Brandt in front to the Brandenburg Gate on the day the building of the wall began. Photo: DPA

Willy Brandt was one of the key German politicians during the era of the Wall. Serving as mayor of Berlin between 1957 and 1966, and as Chancellor of West Germany from 1969 to 1974, the Social Democrat (SPD) man delivered a famed speech on August 16th 1961, three days after building began on the Wall.

The great orator, who wasn't afraid to stand up to the superpowers, demanded that the western powers send reinforcements. US President John F. Kennedy was said to be angered by his demand, exclaiming: “Who does he think he is?”. President John F. Kennedy put his hand over his heart during his speech in Berlin. Photo: DPA

John F. Kennedy gave one of his most renowned speeches on the steps of Rathaus Schöneberg in front of about 450,000 people, in the same place that Mayor Brandt had addressed Berlin two years previously.

Standing before the sea of Berliners, he proclaimed that “all free men, wherever they may live, are citizens of Berlin, and, therefore, as a free man, I take pride in the words Ich bin ein Berliner.”

He confronted those who still supported communism, saying that if they still believed in it, “let them come to Berlin”, also saying it in German “Lass'sie nach Berlin kommen”.

Kennedy was ridiculed by some Western journalists for his German. They claimed he called himself a jelly doughnut, also known by some as a “Berliner”. This is not true and Germans understood him – find out why here.

Three days after the assassination of President Kennedy on November 22nd 1963, Rudolph-Wilde-Platz, where he gave this famous speech, was renamed John-F.-Kennedy-Platz. Standing in front of Berlin's most well-known landmark, the Brandenburg Gate, which stood on the border between the two Berlins, US President Ronald Reagan gave one of the most famous speeches of the Cold War.

Flanked by German President Philipp Jenninger on his right and Chancellor Helmut Kohl on his left, Reagan powerfully demanded that Soviet leader Mikhail Gorbachev remove the wall that had divided the city for nearly 26 years. Erich Honecker stands with a raised fist next to Mikhail Gorbachev at the 11th Party Congress in 1986. Photo: DPA

The ageing East German leader boasted the above quotation – “die Mauer wird in 50 und auch in 100 Jahren noch bestehen bleiben, wenn die dazu vorhandenen Gründe nicht beseitigt sind” (the Wall will still be standing in 50 and even in 100 years, if the reasons for it are not removed) – to a Western journalist just months before the barrier came down.

Often calling the wall an “anti-fascist protection barrier”, Honecker described the West as fascist in comparison to East Germany, where he claimed “we have nothing to restructure.”

The hard-line politician refused to introduce reforms that Gorbachev suggested, and was eventually forced to resign on October 18th 1989.

The succeeding East German government still failed to introduce sufficient reform to prevent the collapse of the GDR, which followed just weeks after. Suffering from liver cancer, Honecker died in Chile in 1994.

6. “It comes into effect, according to my information, immediately” – Günter Schabowski, East Berlin, November 9th 1989

Despite increased pressure on East German authorities to increase freedom of movement between East and West, no one woke up on November 9th 1989 expecting to see people tearing down the wall that evening.

In fact, on that day the East German government had decided to placate protesters by announcing laxer travel regulations.

Schabowski had been put in charge of the press conference, but hadn't been properly briefed on what to say.

Asked by a reporter when the regulations were to come into effect – officially on the following day, and the process would include a long visa-application process – he hesitated, before responding: “Das trifft nach meiner Kenntnis… ist das sofort, unverzüglich” – It comes into effect, according to my information, immediately, without delay.

Brandt next to Berlin's Mayor in 1989, Walter Momper. Photo: DPA

“Jetzt wächst zusammen, was zusammengehört“ (Now what belongs together will grow together) is probably Willy Brandt’s most famous quotation. But he never actually said it – well, certainly not in his speech in 1989. In fact, the iconic quote is a variation on remarks he had made on “belonging” and “growing” in the days following the “Mauerfall”.

Instead, in his speech on November 10th 1989, the day after the fall of the Wall, he spoke of how “the parts of Europe will grow together again.“

“Jetzt wächst zusammen, was zusammengehört” was later cited by a Social Democrat publication and then became the motto of the SPD conference that December. Despite its questionable accuracy, this pithy quote will always be remembered as one of the great orator's most famous sayings.

8. “Many small people, who in many small places do many small things, can alter the face of the world.” –  East Side Gallery, Berlin, 1990

The artwork at the Eastside Gallery. Photo: Kolossos / Wikimedia Commmons

This quotation, citing an “African saying”, is one of the original art pieces at the East Side Gallery in Berlin. The open-air gallery of murals by international artists covers a 1.3-kilometre section of the wall that separated the districts of Kreuzberg and Friedrichshain, and was opened in 1990.

The above mural, attributed to German-Iranian artist Kani Alavi and French artist Muriel Raoux, is over seven metres long. This saying refers to the democratic movement that was eventually able to topple the Berlin Wall.

9. “The Wall was not brought down by Washington, Bonn or Moscow…” – Former German Chancellor Gerhard Schröder, Berlin, November 9th 1999 Gerhard Schröder served as Chancellor of Germany from 1998 to 2005. On the tenth anniversary of the fall of the Wall, he gave a speech to commemorate the event.

Acknowledging how the people brought down the wall, he made the famous remark: “Die Mauer wurde nicht in Washington, Bonn oder Moskau zum Einsturz gebracht. Sie wurde von den mutigen und unerschrockenen Menschen eingedrückt, und zwar von Ost nach West.” (The Wall was not brought down by Washington, Bonn or Moscow. It was razed to the ground by the courageous and intrepid people, from both the East and the West.)

He also used the speech to emphasize how November 9th 1989 had given Germany and Europe another chance to achieve peace and democracy.

10. “The Wall was an edifice of fear. On November 9th, it became a place of joy.” – Former German President Horst Köhler, Berlin, November 9th 2009

Commemorating 20 years since the fall of the Berlin Wall, German President Horst Köhler, who served from 2004 until 2010, gave a speech in his residence, the Bellevue Palace.

Köhler himself is no stranger to borders. He was born in German-occupied Poland in 1943, before he and his family fled to Leipzig. From there they managed to escape to West Berlin in 1953 from Soviet-occupied Germany. He spent much of his childhood as a refugee.

He used the occasion to celebrate the resulting freedom and unity of Europe, and said that Europe must now seize the “opportunities of a cooperative global governance which benefits everyone.”