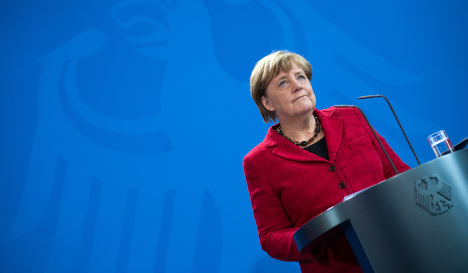 “Germany and America share the values of democracy, freedom, respect for the rule of law and human dignity, regardless of origin, skin colour, religion, gender, sexual orientation or political belief,” said Merkel.

“On the basis of these values, I offer close cooperation to the future president of the United States of America, Donald Trump.”

Merkel also pointed to the global challenges Trump must tackle, saying that “whoever rules this country, with its tremendous economic might, military power and cultural impact, carries a responsibility that can be felt almost anywhere on Earth”.

She stressed that “the partnership with the USA is and will remain the foundation of German foreign policy so that we can meet the great challenges of our times”.

These included, she said, “the pursuit of economic and social prosperity, the struggle for forward-looking climate policy, the war on terrorism, poverty, hunger and disease, the pursuit of peace and freedom, in Germany, Europe and the world”.

Trump was often critical of Merkel throughout his campaign, targeting in particular her liberal refugee policies.

When the German leader was named TIME magazine's Person of the Year last year, Trump tweeted that Merkel was “ruining Germany”

He also criticized political opponent Hillary Clinton by saying that she “wants to be America's Angela Merkel“.

Despite the past slights – and obvious policy differences on climate change, free trade and a host of other issues – Merkel stressed that, for Germany, there is “no country outside the European Union with which we have deeper ties than with the United States”.