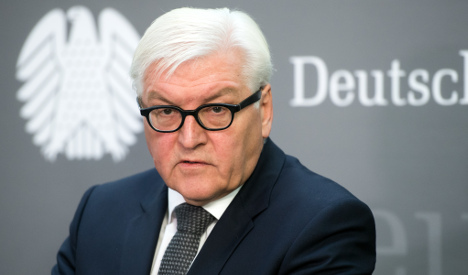 During the US election campaign, the foreign minister had referred to Trump as a “hate preacher” and also described the prospect of him taking the White House as “frightening”.

Nevertheless, Germany's top diplomat said he would not give up on transatlantic ties, which he said were “akin to the foundations of the West”.

“We must not abandon this foundation,” he said, pointing to the traditionally strong diplomatic and people-to-people ties between the two countries.

Other German politicians across the political spectrum reacted on Wednesday with “shock” as well as scepticism about US voters choosing Trump as their future president.

“It is more than a letdown, it is a shock,” said Chancellor Angela Merkel’s conservative CDU party mate Norbert Röttgen to broadcaster ZDF.

“His words and his manner are a crazy burden that he cannot easily cast off,” Röttgen added.

“I think we must take him as he has presented himself.”

Röttgen also told broadcaster N-tv that he believed Trump’s election as president would cause a “deep estrangement” between Europe and the US.

German EU Parliament president Martin Schulz, however, said that he assumed that the European Union and Trump could work together as normal, according to ZDF.

Defense Minister Ursula von der Leyen told broadcaster ARD that the election results were a “serious shock”. She explained that questions such as Trump’s stance on the NATO alliance remained open.
“Our interest is to have an America that is willing to take responsibility and is open-minded.”
But the defence minister also emphasized the importance of respecting the election.
“Even if this election campaign was imbued with vilification and division, it is a democratic, free vote. And we must now deal with the reality.”
Members of the Green party had slightly harsher words for the real estate tycoon.
“It is a break with our tradition up until now, that the West stands for liberal values,” said Green party chair Cem Özdemir to ZDF.
Social Democrat Ralf Stegner also expressed pessimistic views.
“When the left behind and frustrated follow a billionaire, tax-evader, and liar, progressive powers have also failed,” Stegner said to ZDF.

Others doubted whether Trump would be able to follow through with his campaign promises.
“He will not be able to offer anything to the people to whom he promised everything possible,” said Die Linke (Left Party) chair Bernd Riexinger.
“He will move towards an authoritarian society.”
The far-right Alternative for Germany (AfD) meanwhile rejoiced in the vote.
“Congratulations to the future president of the United States of America, Donald Trump,” wrote AfD leader Frauke Petry on Twitter, along with an image of Trump with the words “This night has changed the USA, Europe and the world.”

PARTNER CONTENT
Can you guess how many Americans abroad voted in the last US midterms?
Url copied to clipboard!