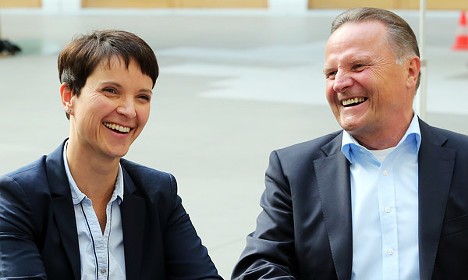 On Wednesday morning, shortly after Trump's victory over Democratic rival Hillary Clinton was confirmed, Petry tweeted an AfD image which claimed that “this night changes the USA, Europe and the world!”

Shortly after she tweeted that “Americans have chosen a new beginning free of corruption and sleaze. This is a historic chance.”

Trump's utterances against immigration, and specifically against Muslims, means there is more than a passing resemblance between him and the AfD, who among other things want a ban on minarets and Muslim face veils.

Germany's Vice-Chancellor Sigmar Gabriel claimed on Wednesday that Trump's victory was a “warning to us” ahead of Germany's general elections next autumn where right-wing populists are expected to make inroads.

But Dr. Carsten Koschmieder, an expert on the AfD at the Free University in Berlin, emphasizes that there is no way the party could emulate Trump's success in next year's election, as far as gaining seats in the German parliament (Bundestag).

“That's not realistic due to Germany electoral system,” he explains. “The AfD have no chance of winning an absolute majority. That means they would have to build a coalition.”

The party's key demand is that Merkel resigns, ruling out a coalition with her Christian Democratic Union (CDU), Koschmieder argues, adding that alliances with the more left-wing parties are “inconceivable.”

The far-right party are likely to use Trump's victory for their own benefit though, the academic says.

“They can now say ‘look the situation in the US is similar to here. The media and all the other parties don't like us, but in America you see that the true will of the people is on Trump's side, and in Germany the true people's will is on our side'.

“They will try and use that to mobilize people who would have normally not voted, but could now be persuaded that things can be changed.”

Tactics used by the AfD are also similar to those deployed by the Trump campaign, according to Koschmieder

Like Trump, the AfD have deliberately caused scandal during election campaigns – for instance with comments about shooting children on Germany's borders – so that they can accuse the “Lügenpresse” (lying press) of misinterpreting them intentionally to present them in a poor light, says the academic.

“Through these scandals, you remain a point of debate and make it clear to voters that you are a radical alternative.”