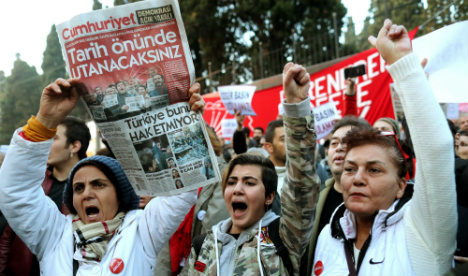 A protest in Istanbul for the Cumhuriyet newspaper. Photo:DPA

Germany is open to providing protection for Turks who have been “politically persecuted” by President Recep Tayyip Erdogan's government in its widening crackdown following a failed putsch, a senior German official said on Tuesday.

“All critics in Turkey should know that the German government stands in solidarity with them,” Michael Roth, state secretary at the foreign ministry, told Die Welt daily.

He cautioned that Turkish dissidents would have their individual cases considered by the authorities but said that Germany is “a tolerant country which as a rule is open to the politically persecuted”, adding that “they can seek asylum in Germany. That's not just the case for journalists.”

Relations between Ankara and Berlin have been strained in the wake of the July 15th failed military coup, with Germany repeatedly expressing concern over the scope of the crackdown on suspects.

In a strongly worded statement, the ministry said Ankara should not use a crackdown against terror as an excuse to muzzle the opposition.

Reiterating Germany's concerns, Roth said: “What is happening in Turkey right now has nothing to do with European values – the rule of law, democracy and media freedom.”

“Our response to the Turkish government is crystal clear – what you are doing is wrong!”

Separately, President Joachim Gauck also sent a strong signal to Ankara, as he pledged German support for democratic voices in Turkey during a meeting late on Monday with the former editor-in-chief of top opposition daily Cumhuriyet, Can Dündar.

Gauck told Dündar of his respect for his work and engagement, according to sources who attended the closed-door meeting.

Turkey last week remanded in custody nine staff from Cumhuriyet, adding growing international alarm over the use of a state of emergency implemented in the wake of the coup against Erdogan's critics.