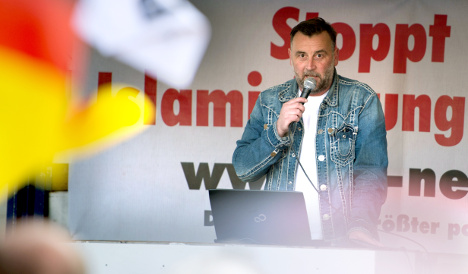 The city of Dresden has banned Pegida leader Lutz Bachmann from running his group’s rallies, a spokeswoman from the city confirmed to Die Zeit on Tuesday.

Bachmann had organized a rally on German Unity Day – October 3rd – when the Saxon capital was playing host to national celebrations, attended by Chancellor Angela Merkel and President Joachim Gauck. But according to Zeit, the protest had not been authorized and took place at a location where the city had banned demonstrations.
During the rally, Pegida supporters jeered at the Chancellor and yelled “get out”, and also shouted down Gauck.
Bachmann and his deputy leader, Siegfried Däbritz, will not be allowed to lead Pegida rallies until October 31st  2021 and, if they do, they face a fine of €1,000, according to DPA.
But Bachmann wrote on Facebook that “of course Sigi [Däbritz] and I will continue to be at our walks through Dresden” and that someone else will now act as a leader.
Bachmann has previously had to step back from his role as leader of the group. In 2015, he resigned after a photo emerged of him posing as Adolf Hitler. But only four weeks after his resignation, he was voted back in as leader.
The 43-year-old has also faced legal troubles over his social media posts, being found guilty of inciting hatred by a Dresden court in May for calling refugees, among other things, “cattle” and “scum”. He was sentenced to pay a fine of €9,600.
Bachmann has also faced opposition within his own group since he moved to the Spanish island of Tenerife off the coast of Africa, saying he felt “persecuted” in Germany.
In September, a splinter group from Pegida formed to protest against Bachmann after revelations surfaced about his new home on the holiday island.
The local government in Tenerife also declared Bachmann as a 'persona non grata' last month, without naming concrete consequences, according to Spanish news agency EFE.