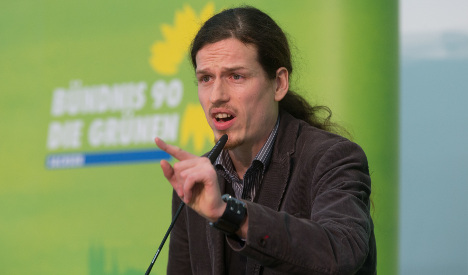 Saxony Green party leader Jürgen Kasek was riding a train in Naumburg, Saxony-Anhalt on Sunday when fans of the club Lokomotive Leipzig attacked him, the politician said on Monday.

Kasek wrote on Twitter that the train was full of football fans and that, once they recognized him, one of them threw a bottle at his head. The group was “extremely aggressive” and were uttering “nasty insults”, Kasek wrote.
The politician said that police responded by taking him and two other Green party members, Christin Melcher and Monika Lazar, off the train, while restraining the mob of hooligans who were yelling inside the vehicle.
Kasek said the police seemed overwhelmed and were also aggressive towards the Green party members.
“I think that they were primarily trying to resolve the situation,” he told DPA.
While Kasek said he was doing well after the encounter, he said he would go to the doctor as a precautionary measure. He also said he would file a criminal complaint of assault and insults.
Federal police told Spiegel Online that they knew of the events on the train and said that the facts must be examined and evaluated.
Kasek has been outspoken against the extreme right-wing scene and had reported anti-Islam Pegida movement leader Lutz Bachmann for incitement of hatred, according to Die Zeit. Kasek has also demonstrated against a Pegida offshoot group in Leipzig.
A little over a week ago, Kasek posted on Twitter a ‘wanted’ sign that someone had made for him, listing his address and offering €10,000 for someone to give him “something to think about”.

Kasek thanked his followers on Twitter for their show of solidarity and support.
“Let us together reject this hate and violence, and protect human rights and democracy,” he wrote.