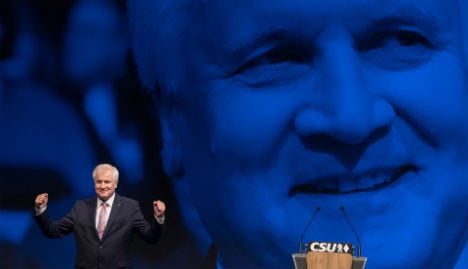 Horst Seehofer talks to CSU faithful on Friday. Photo: Peter Kneffel/dpa
Less than a year before national elections, Seehofer told a congress of his CSU party that he remains committed to a national upper limit of 200,000 asylum seekers a year – compared to the nearly 900,000 who arrived last year.
The Bavarian state premier said that as he and Merkel disagreed on this point, she had stayed away from the party congress because neither side wanted to feign a “dishonest compromise”.
“On this question I will not sell the soul of the CSU,” Seehofer said to applause, adding however that talks between the traditional allies, the CSU and Merkel's CDU, were otherwise going well.
Looking ahead, he said, the common cause of the CDU-CSU must be to prevent a leftist alliance after September 2017 elections of the Social Democrats, Greens and far-left Linke, which succeeded communist East Germany's Socialist Unity Party or SED.
“Our enemy is not CDU, we've always had different views on this or that point,” Seehofer told party faithful in conciliatory words toward Merkel after a bruising year.
“The enemy is red-red-green,” as the suggested three-party alliance is known in Germany's colour-coded political jargon.
Seehofer said he did not want to see the day “when the SED's grandchildren return to government in Germany” and vowed that the CSU would always be “a bastion against a leftist front”.