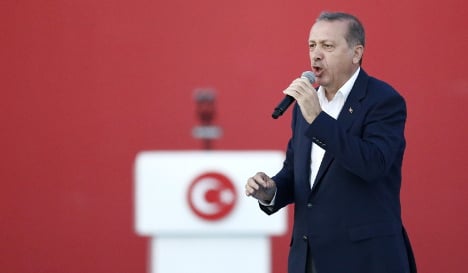 Erdogan said that he had handed Chancellor Angela Merkel some 4,000 dossiers about suspects in Germany, but had received no response in return.

With Merkel on Wednesday calling Turkey's crackdown on media “highly alarming“, Erdogan said Germany was more interested in voicing concern for the newspapers, which he said “support terror groups”.

Ankara accuses the US-based preacher Fethullah Gülen of being behind the coup, saying he leads a group called the Fethullah Terror Group (FETO). Gülen denies the charges.

“You [Germany] are going to be remembered in history for playing host to terror,” Erdogan said in a speech at his presidential palace in Ankara.

“We are worried that Germany is turning into FETO's back garden,” he said, also accusing Germany of playing host to members of the outlawed Kurdistan Workers Party (PKK) and the ultra-leftist Revolutionary People's Liberation Party-Front (DHKP-C).

“Germany has become one of the most important countries for hosting terrorists”, he said, noting also that the country had seen racist attacks against Turks living there.

Erdogan did not mention which suspects Ankara wanted to see extradited from Germany over the coup but several figures, in particular from the legal sector, are believed to have fled to Germany.

Relations between Ankara and Berlin have strained in the wake of the failed coup, with Germany repeatedly expressing concern over the scope of the crackdown on suspects.

Merkel on Wednesday said it was “highly alarming that freedom of the press and speech are being restricted again and again” after the authorities on Monday detained 13 journalists from the opposition Cumhuriyet newspaper.

They include the paper's editor-in-chief Murat Sabuncu and its hugely prominent editorial advisor and columnist Kadri Gursel.

The paper's former editor-in-chief Can Dündar, who was given a jail sentence in a previous case and also hit with an arrest warrant, is currently in Germany.

The official Anadolu news agency said on Wednesday that Berlin had issued Dündar with a document allowing him to travel after his Turkish passport was cancelled.