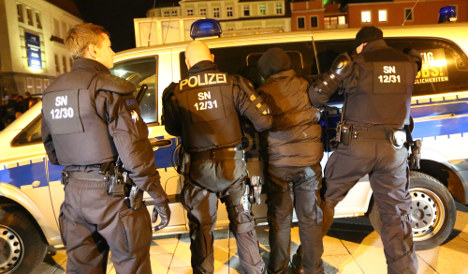 Police during a far-right demo in Bautzen in October. Photo: DPA.

The exact details of what happened in Bautzen, a town of 40,000 in Saxony, on Tuesday night is still hazy.

Shortly before midnight, national newspaper Die Zeit published an article claiming that 40 to 50 right-wing extremists hunted down two refugees in the town. One of the refugees was reportedly yanked from his bicycle and then had a rock thrown at him. Both were eventually able to get away.

Die Zeit further claimed that police only intervened when the group started chasing the refugees. Officers then took one of the victims with them.
A police spokesman then told Die Zeit “nothing special” had occurred on Tuesday evening.
But on Wednesday morning police denied that a “hunt” had occurred the night before, saying that a group of around ten to 15 people had thrown stones at two asylum seekers.
The police account stated that a 20-year-old asylum seeker, accompanied by two other asylum seekers, had physically attacked a German teen. After police had taken the 20-year-old into custody, the two other refugees were followed by a group who seemed to throw rocks at them, hitting one in the leg. When the group saw the police, they fled, according to the police account.
Officers arrested four suspects, some of whom were already known to authorities. A police spokesman told Tagesspiegel that they “could not rule out” that at least some of the group belonged to the far right-wing scene.
But later on Wednesday the Süddeutsche Zeitung (SZ) also reported an eyewitness account describing between 40 and 50 people who had “hunted down” the two asylum seekers. The group were reportedly wearing dark clothing with right-wing extremist symbols. Some of their vehicles had slogans like “White Power” written on them and they were chanting “get out” to the young men, according to SZ.
Tagesspiegel also reported that groups have popped up in the town calling themselves “Citizens Movement Bautzen” (Bürgerbewegung Bautzen) and “National Front Bautzen”. Citizens Movement Bautzen posted on Facebook on Monday a warning to locals, saying, “Warning! The migrants are planning something… police have been informed… Please all with children stay away from the centre.”
Police called the message “highly speculative”, saying it had been based on rumours.
Local Die Linke (Left Party) politician Juliane Nagel was critical of police to Tagesspiegel on Wednesday.
“When it's confirmed that refugees were hunted, threatened and attacked, that is of course an 'exceptional situation', contrary to the depiction by police,” Nagel said.
“Racism is not normal, and Saxony must also finally learn this.”
Sebastian Striegel, a Green Party member in the state parliament in Saxony-Anhalt, tweeted: “If we didn't have researched journalism, we would have to believe what the police told us about Bautzen. At most that would be half of the truth.”

More instances of threats against refugees
In a night of trouble, police recorded two other threatening incidents against refugees on Tuesday night and early Wednesday morning.
Five friends – three young refugees and two Germans – had gone to the central Kornmarkt area in the town. According to witnesses, they were threatened by a group of about eight men, two of whom aimed what appeared to be guns at the refugees. Witnesses said the larger group was made up of people from the far-right scene.
Police said that they then launched an “extensive search” and identified numerous people, but said there were “no known concrete suspects”.
A 39-year-old asylum seeker later told police that someone had threatened him with what appeared to be a gun. Police were able to identify and search the suspect, who had a non-lethal gun as well as cannabis and methamphetamines.
Police have increased their presence in the town of roughly 40,000 since tensions between far-right groups and asylum seekers escalated in September. Some 80 locals from the far-right scene and 20 refugees faced off at the Kornmarkt on September 14th, resulting in physical fights and injuries.
At one point members of the far-right group attacked an ambulance that was supposed to transport a young refugee to hospital.
Police controversies
The police in Saxony have been involved in several controversial episodes over recent months, as critics have accused them of being too close to far-right movements.
In March Saxony's own deputy minister-president said “I ask myself if sympathies for Pegida and the AfD [Alternative for Germany] are more widespread in the police than among normal citizens.”
At Unity Day celebrations in Dresden at the start of October, a police officer wished demonstrators for the xenophobic Pegida movement “a successful day“, leading to accusations of implicit support.
In February a disturbing video emerged of officers dragging a terrified refugee from a bus in the Saxon town of Clausnitz while a mob of anti-refugees demonstrators blocked the vehicle.
The justice system in the eastern state has also been involved in a scandal, after an alleged Isis terrorist apparently committed suicide while in the care in a jail in Leipzig.