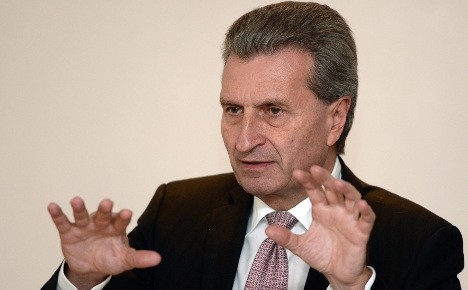 “I can now see that the words I used have created bad feelings and may even have hurt people. This was not my intention and I would like to apologise for any remark that was not as respectful as it should have been,” Oettinger said in a statement.

China voiced its disdain Wednesday over his remarks, saying they revealed “a baffling sense of superiority entrenched in some Western politicians.”

A video that emerged on YouTube showed Oettinger addressing the business audience using the words “slitty eyes” and “chiselers” to refer to Chinese people.

Oettinger, commissioner for the EU digital economy who was last week named to take on the budget portfolio as well, went on to make disparaging remarks about women, gay marriage and Belgian politicians.

In Thursday's statement, he did not refer to any specific remarks and said his intention had been to give Germany a “wake-up call” over China's increasing power and a debilitating political correctness at home which stymied an effective response.

“I have great respect for the dynamics of the Chinese economy – China is a partner and a tough competitor,” he said.

Oettinger also said that remarks about the Belgian region of Wallonia, which held up the signing of a landmark EU-Canada trade deal for several weeks, had been misquoted.

“Let me add here that I regret that some of my remarks were misquoted regarding Wallonia which is not only historically an important European region, but actively contributes to the cultural and political diversity of Europe,” he said in the statement.