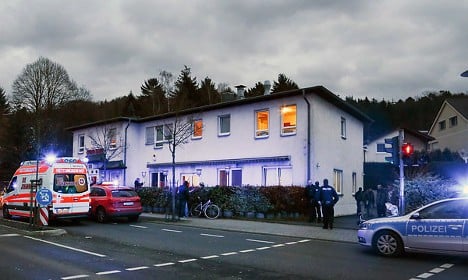 Emergency services the scene in Lohmar, near Bonn, in February. Photo: DPA

The man was convicted on Thursday of three counts of attempted murder for the crime, committed at a refugee home in Lohmar, North Rhine-Westphalia.

On February 1st, the man had reportedly gotten into a fight with his wife, hitting her in the face with a saucepan. He later took each of his three children and threw them out of the window of the bathroom – a 4.8 metre fall.

The father first took his five-year-old son, sat him on the windowsill and kissed him as the little boy begged “Papa, for God's sake.” The father then threw his two daughters from the window.

The seven-year-old daughter sustained life threatening injuries and had to undergo emergency surgery. The five-year-old boy was also critically injured with broken bones and skull fractures like his older sister. Their one-year-old sister luckily landed on top of her brother and avoided more serious wounds.

The father confessed to throwing the children out the window in the incident which occurred on February 1st. Prosecutors argued that he had become violent after feeling frustrated that his wife “no longer wished to accept the roles they had at home, and did not want to put up with everything he wanted any more.”
A psychiatric expert testified that the father had seemingly acted against the children in order to punish his wife. Still, the expert determined that the man could be held criminally liable.
The defense had argued for a lighter sentence, saying that the court must take into consideration the impact the Syrian war had had on the man. They said he had come from a poor background with no formal education and had a difficult time adjusting to Germany after having to flee his country.
Prosecutors, on the other hand, had called for a life sentence.
The man himself told the court that “in Syria, I would have been let go after a month.”
He also pleaded with the head judge to allow him and his family to go to Turkey.
“I don’t want to stay here another minute longer,” he said.
“I promise you that I will never hurt my children or anyone else ever again,” he said, adding that if he had really wanted to kill his children, he would have already done so in Syria.
The wife has filed for divorce since the violent incident.
In January he had been issued a ten-day restraining order after he attacked his wife, though she later allowed him to move back in.
The husband had left Syria in 2014 alone and came to Germany after travelling through Turkey, Bulgaria and France. His family later joined him.