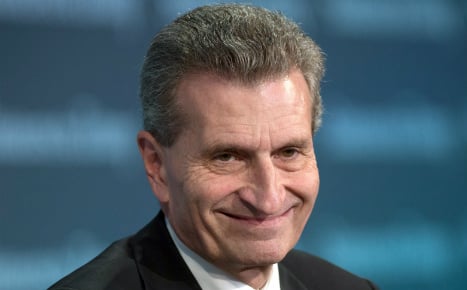 Oettinger was recently promoted to become EU budget commissioner, one of the most powerful positions in Brussels, having already served since 2010 as energy commissioner and then digital economy commissioner.

But when he has made headlines, it has often been for statements which indicate a lack of sensibility for the modern world, rather than on his own EU policy beat.

The latest in a long line of gaffes came at a business event in Hamburg in October, where the 63-year-old was secretly recorded disparaging Chinese people with the terms “slitty eyes” and “chiselers”.

He also mocked a delegation of Chinese ministers, saying they had “their hair combed from left to right with shoe polish.”
In the same speech, Oettinger referred to Wallonia, a region in Belgium which had held up a controversial free trade deal between the EU and Canada, as being “run by communists.”
The Chinese foreign ministry said the statements revealed “a baffling sense of superiority entrenched in some Western politicians.”
But Chancellor Angela Merkel has firmly backed Oettinger, who is also a member of her Christian Democratic Union (CDU), with her spokesperson describing him on Monday as “incredibly qualified” for the post of budget commissioner.
After prolonged criticism of this response, Merkel released a cautious admonishment on Wednesday.
“Everyone has their own way of talking. What was heard there was certainly not the Chancellor’s style of talking. Everyone must be careful that they don’t hurt other people with their speech,” said her head spokesman Steffen Seibert.
Social media users in Germany were less kind to the ex-Minister President of the southern state of Baden-Württemberg.

“Oettinger is the best paid clown in the EU. Now he only needs to be funny,” tweeted one user.

Another commented that “people with such a lack of etiquette and urbanity should only be employed in their own obscure province.”

This is far from the first time Oettinger has had Germans cringing in embarrassment at his bizarre utterances.

In 2010, while he was commissioner for energy, he gave a speech in English which was widely mocked after it revealed his poor grasp of the language of Shakespeare.

In some passages, Oettinger appeared not to understand what he was saying himself and began to omit challenging words and phrases.

He also bizarrely suggested to Bild in 2011 that EU member states which break rules on levels of public debt should have their flags flown at half mast outside EU buildings.

Comments he made in 2014 also met with ridicule. After several celebrities had naked pictures of themselves stolen from Apple’s iCloud, Oettinger said: “If a celebrity is stupid enough to take a nude photo of themselves and put it on the Internet, then they can't expect us to protect them.”

News site Spiegel Online said the comment showed that the then 60-year-old “has not understood the affair about hacked celebrity images.”

Early this year, meanwhile, he suggested he would shoot himslef in the head if he were married to Frauke Petry, the leader of the far-right Alternative for Germany party (AfD).