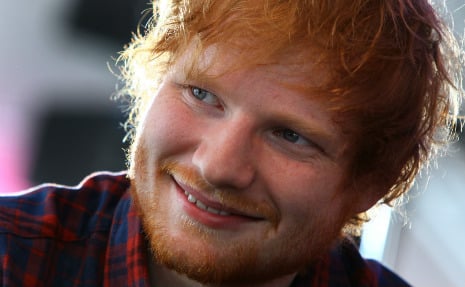 At long last Germans can see what Ed Sheeran looks like. Photo: DPA
German social media users expressed exuberant excitement on Twitter and other forums that they at last had the chance to watch videos by some of their favourite artists, after musicians' body GEMA came to a licensing deal with YouTube, ending a years-long block on its artists' content on the video-sharing site.

User Busterbeans implied that Tuesday was a day of freedom, writing “this is what this is what the topic of GEMA brings to my mind.”

Meanwhile user Jenny commented that “finally” she could watch her favourite video by Ghost Town.

Finally i can watch this video from @GhostTown #GEMA https://t.co/TSceIOzHWz

Up until Tuesday, Germany was one of the world's most restrictive countries in terms of access to music videos. But this all changed when YouTube announced a deal with performing rights organization GEMA to pay when people stream music in Germany.

YouTube users in the country had for years been confronted with a red sad-face emoticon and messages announcing “this video is not available in Germany” when trying to view videos ranging from the latest pop clips to films with GEMA-controlled background music.

Now the blockages should largely be a thing of the past.

On Twitter the story was the number one hashtag in Germany by Tuesday afternoon, as thousands of people expressed their glee.

Not all took it so seriosuly though, with user Noel DE noting the resemblance to the end of the Cold War, tweeting: “Our parents tell stories of the GDR and the fall of the wall, we’ll tell our kids what it was like when YouTube and GEMA came to an agreement.”

Even serious news outlets made the story one of their top articles of the day.

Hard-hitting news site Spiegel's lead headline on its online homepage proclaimed “what the end of the long fight means for YouTube users” above a banner picture of pop star Macklemore.

The equally serious Süddeutsche Zeitung (SZ) went with “These artists' videos can now be watched on YouTube” next to a picture of Schlager singer Helene Fischer – news that will no doubt be music to the ears of their readers.
The SZ noted that Taylor Swift, Lady Gaga and Ed Sheeran would now also be available on the video uploading site.
With AFP