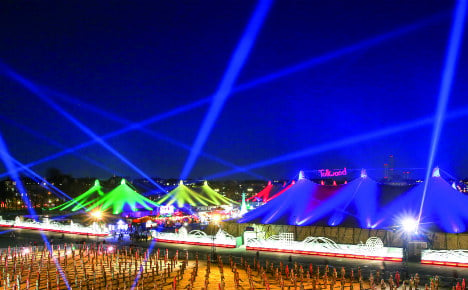 The hr-Bigband and Jim McNeely, who will be performing at the festival. Photo: Dirk Ostermeier / Berliner Festspiele

“Now more than half a century old, the event itself has become something of a Grande Dame of the jazz festival scene,” said the Daily Telegraph about last year's Jazzfest. First held in West Berlin in 1964, the festival is still going strong, and this year sees an extended version from November 1st for six days.

The 53rd Jazzfest will take place in four venues across Berlin. It is based at the Berliner Festspiele arts centre, with other concerts at the Kaiser Wilhelm Memorial Church, the A-Trane jazz club and at the Maison de France.

With more than 16 jazz ensembles and five duo combinations, the festival promises to be a great few days for jazz lovers. Tickets are now on sale.

The Leonhardifahrt is a religious procession in honour of Saint Leonhard of Noblac, the patron saint of livestock, in the south Bavarian town of Bad Tölz.

Each year on Leonhard's saint day – this year falling on November 7th – a procession of procession of beautifully adorned horses and carts gathers in the spa area of town in the early morning hours before making a pilgrimage up the hill to Leonhard’s Chapel. The procession is followed by a traditional display of whip cracking – a site to behold due to the skill and strength required.

The procession is a great example of traditional religious customs in Bavaria, and takes place with the scenic backdrop of the old town.

Starting at 11 minutes past 11am on the 11th day of the 11th month, Karneval is steeped in history and curious tradition. The main festivities featuring parades and colourful costumes start up before the beginning of Lent in February of next year, but the party officially kicks off in November.

One of Karneval's strangest customs is the Dreigestirn (the triumvirate): each year before the Karneval season, three people are chosen as the Jungfrau, Prinz and Bauer (virgin, prince and farmer), who are central within the festivities. The virgin is always portrayed by a man who is not allowed facial hair.

On November 11th, up to 70,000 revellers will come together in Heumarkt Square in Cologne's old town. The square is transformed into carnival craziness, with traditional bands regaling the crowd till the evening. The Dreigestirn are also set to make an appearance.

Although official celebrations in the square end in the early evening, don't worry: bars around the city keep the partying going into the early hours.

The carnival season officially ends with Ash Wednesday on March 1st next year.

The show promises a fairytale landscape in which visitors wander through one and a half kilometres of “breathtaking light shows, bright dream forests and magical light figures” far from the packed crowds of Berlin's Christmas markets.

At the end of the adventure, there is a variety of food stalls offering local culinary specialties, as well as fire pits to gather round. For the more athletic, there is also a 300-metre squared ice rink. The opening concert will take place in the Toscana Room in the Residenz in Würzburg. Photo: Wikimedia Commons

The beautiful city of Würzburg in northern Bavaria is the perfect setting for the Bach Days, which are held there every November. The festival showcases many of Bach’s best oratorios, symphony concertos, piano concertos and a song night.

Although this festival is about celebrating the life and works of the German composer, it’s not exclusively Bach. Music by Mendelssohn, Reger, Beethoven, and others will also be performed throughout the ten-day period. “Cowboy boots instead of winter boots” is the motto for this year’s Tollwood winter festival held in Munich's Theresienwiese, the huge area where Oktoberfest is held.

The festival, which this year concentrates on “sustainable mobility”, will try to educate visitors about the advantages of carpooling, public transport and cycling – there will even be a bicycle bell concert with 1,000 bells distributed throughout the audience.

Also watch out for Germany’s Christmas markets, which will start to pop up throughout the country towards the end of the month. Most start during the last week of November, but if you can’t wait, Düsseldorf Christmas market is one of the first to open on November 17th.