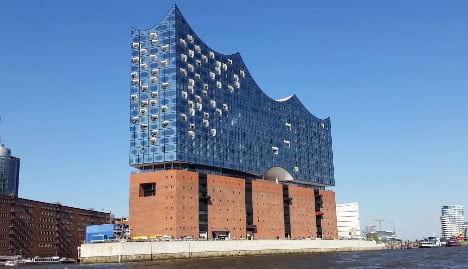 The Elbphilharmonie, which towers over Hamburg harbour in front of the Speicherstadt UNESCO world heritage site, is a soaring monument to that fact that Berlin is not the only German city that can embarrass itself with horribly mismanaged public projects.

But, unlike Berlin's still unopened international airport, the Hamburg concert hall has finally been completed.
On Monday, building firm Hochtief lit the glass facade up with the block lettering FERTIG (finished) to announce the news.

It certainly took a while.

The concert hall, which Hamburg claims will become a landmark known around the world, was supposed to be completed in 2010. An opening date in 2013 was then also cancelled, with 2014 and 2015 both promised as finishing dates. The concert hall lit up with the word 'finished' on Monday. Photo: DPA

The cost that the taxpayer has had to foot for the project has also risen from an initial projection of €77 million to €789 million.

A parliamentary investigation into the project in 2014 found that planners had spent almost €300 on each toilet brush and that paper towel dispensers cost €957 each.

But when Hochtief passed over the keys for the building to the city on Monday, mayor Olaf Scholz chose to concentrate on the positives.

“Hamburg has gained a building so impressive in the Elbphilharmonie, that it is already impossible to imagine the city without it,” he said.

Ex-mayor Ole von Beust, who initiated the project, said the building had “brought international attention to Hamburg and has delighted the city’s people.”

The building's first concert is set to be held on January 11th 2017. Musicians who have already tested out the concert hall are said to be highly impressed by the acoustics.

An opening ceremony will also be held on the concert hall’s plaza area on Friday.