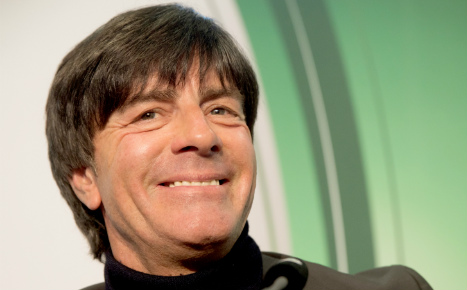 The 56-year-old, who took charge in 2006, has penned a two-year extension to lead Germany's defence of the World Cup in Russia in 2018 and to the European Championships in 2020.

If Löw stays in office until 2020, his 14-year reign would make him the joint second-longest serving Germany coach, equal to Helmut Schoen (1964-78).

Having won a fourth World Cup in Brazil two years ago but lost to hosts France in the Euro 2016 semi-finals in July, one of Löw's goal is to win their first European crown since 1996.

“We have visions and things that we want to tackle, so the time of the extension was just right,” Löw told a press conference in Frankfurt.

“The goal is, of course, to repeat our success story in Rio and we want to be European champions, which is a big goal of mine. When the head and the heart both say 'yes' at the same time, then there is not much to think about.

“I feel the same motivation as I did at the beginning of my term at the DFB and I still feel their confidence.

“It's simply great fun to work with this team and these players.”

Löw, who took charge of the die Mannschaft after the 2006 World Cup following two years as assistant coach under Jurgen Klinsmann, will reportedly receive a pay rise to earn four million euros per year.

His old deal is believed to have earned him an annual salary of around three million euros.

“Löw is the best coach, that we in the DFB's executive committee can imagine,” said German FA president Reinhard Grindel.

“We have the same goal – we want to defend our World Cup title in Russia and, after we were so close to it in France this year, we want to try to be Europe champions in 2020.”

Grindel added that Löw's new deal was 'a reward' for the head coach's hard work, but the president wanted to get the contract signed before the German FA meets in Erfurt on November 3rd-4th.

Sepp Herberger holds the 28-year record for a Germany coach, from 1936-64, during which time he led West Germany to their first World Cup title in 1954.

Germany, who are top of their 2018 World Cup qualifying group with three straight wins, play minnows San Marino away in their next qualifier on November 11th before facing Italy four days later in a friendly in Milan.