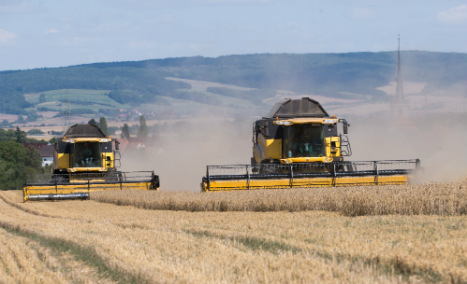 The Living Planet Report, published by the World Wide Fund for Nature (WWF) on Friday, reveals that 5.6 percent of indigenous species in Germany have already died out. Others, such as the partridge and lapwing, are threatened with extinction.

Throughout Europe, skylarks are becoming ever more rare as they cannot feed themselves in the “sterile fields” of modern agriculture, Christoph Heinrich, board member for WWF Germany, said while presenting the report in Berlin on Thursday.
Responsible for this looming collapse in Germany’s biodiversity is intensive farming methods, namely an excess of nitrogen resulting from the use of artificial fertilizer.

But even with intensified farming methods, Germany fails to cover its own consumption through inland production, relying heavily on soya grown in South America to feed its livestock.

The soya necessary to supply German livestock, which is grown at the expense of ecologically sensitive natural stocks, covers two million hectares of land, or an area the size of the western state of Rhineland-Palatinate, the report notes.

“People underestimate the destructive capacity of meat,” said Heinrich, calling on the government to do more to create sustainable supply chains for the German consumer.

Overall the report noted that Germany’s ecological footprint is one of the worst in global comparison.

Germany’s footprint of 5.2 gha per head made it one of the highest in Europe, but somewhat behind Sweden, which – along with Canada, the United States, the United Arab Emirates and Australia – has an ecological footprint over 7 gha.

The report looked at the state of biodiversity globally and made for an eye-watering reading, with animal stocks in lakes and rivers globally falling by 81 percent since the 1970s.

“This is a horrifying and surprising discovery for an environmental organization. A great river like the Congo has been fished almost dry,” said Heinrich.

The report studied populations of 14,000 vertebrates and found that on average stocks had fallen by 60 percent between 1970 and 2012.

“We can prove fairly precisely that, since the 1970s, humans have been overusing the planet – and that it is getting worse with every passing year,” said Heinrich.