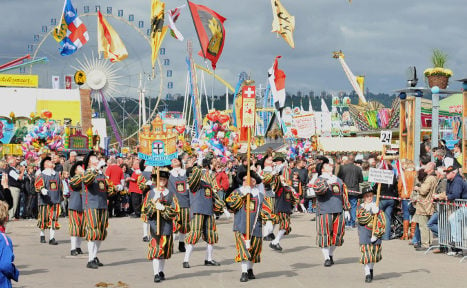 Scots will be happy to know their reputation as a land of penny-pinching misers spreads well beyond the British Isles.

In Germany the Gaelic suffix 'Mac' is shorthand for cheapness. Discounter Mäc-Geiz (Mac-Stingy), gym McFit and stationary chain McPaper all use it as code for rock bottom prices.

The good news though, is that Scots aren't the people most renowned in Germany for their thriftiness. That award goes to the people of Swabia – a region in the southwest of the country which includes Stuttgart, state capital of Baden-Württemberg.

And Swabians are not just accused of being miserly. They are also seen as overly tidy and uptight, yet hard-working and inventive. Such is the strength of emotion felt against them in Berlin, that the term Schwabenhass (hatred for Swabians) has been coined there.

The German capital is home to around 300,000 Swabians, who are blamed for gentrifying certain neighbourhoods and bringing a bourgeois sense for order to the chaotic capital.

Germany's powerful finance minister, Wolfgang Schäuble, who has a well-earned reputation for tight-fistedness with public finances, is regularly made fun of for his Swabian roots.

The similarities between Scots and Swabians have often been noted. In a column for Deutsche Welle, Peter Zudeick brought up an old joke that the Scots were originally Swabian before being thrown out for being too easygoing with their money.

'An impoverished society. No doubt'

Now a new exhibition in Stuttgart is addressing stereotypes about Swabians, both positive and negative.

“Swabians: the myth and the brand”, on display in the Württemberg State Museum until April next year, aims to test these cliches via over 300 objects and artifacts linked to the region's 2,000 year-old culture.

Curator Frank Lang conceded that the Swabian reputation for thriftiness is not unfounded.

“It was an impoverished society, there's no doubt,” he says, arguing that economic pressure turned Swabians into economical people, and this mindset eventually led to economic success.

Baden-Württemberg is now one of the wealthiest regions in Germany and is probably best known as the home of luxury car manufacturer Daimler-Benz.

Swabians are not just known for being tight with their money. They are generally said to be unable to get rid of anything, in case it becomes useful later.

Eberhard Fritz, head of the Württemberg House Archive, identifies the religious movement of Pietism, which spread to the region in the 17th Century, as the root of this habit. The Lutheran movement emphasizes modesty, and carelessly throwing away household goods was considered morally reprehensible.

This stereotype can be visualized best in the Kehrwoche or “cleaning rota”. The tradition emerged in the 19th century as larger tenement blocks appeared in Stuttgart. What began as a seemingly democratic way to uphold communal cleanliness, distributing the responsibility for cleaning a building among its tenants, is now used to poke fun at Swabians for being uptight and obsessed with order.

But not all the stereotypes are bad.

The notion of Swabians as diligent and industrious established itself in the 19th Century, as the people of the region responded to poverty and the Industrial Revolution, Lang explained.

“Hard work is still valued today, especially in the countryside, such as in farming, where people still take on side jobs.”

And like Scotland, Swabia is also considered a region full of canny, inventors. Swabians are considered smarter than other German counterparts, based on a reputation for filing lots of patent applications.

Lang's response to this? “It is problematic to draw conclusions about a whole population's characteristics.”

Fatty foods and an unintelligible dialect

An integral part of Swabian culture is its indulgent food, most prominently Spätzle, an egg noodle whose name translates as “little sparrows”.

This dish is traditionally smothered in butter or cheese with roasted onions on top, but can also be eaten with meat and gravy. Some of the objects on show: Spätzle presses for making the popular Swabian dish. Photo: DPA.

Scots, with their love of cheese covered chips, may well find kindred culinary spirits in these carbs-covered-in-cheese lovers. Throw in a love of excessive drinking – a beer festival in Stuttgart this year pulled in nearly four million visitors – and you might just have a match made in heaven.

Then there is a dialect so incomprehensible, it would make an American on holiday in Glasgow feel like they were talking to the Queen.

It's something the Swabians even have a laugh at themselves. Baden-Württemberg's motto is “Wir können alles. Außer Hochdeutsch” or “We can do anything, except speak standard German”.

Their bizarre dialect is maybe best summed up by the well-known saying “Net bruddelt isch gnug globt” which in standard German would be “Nicht geschimpft ist gelobt genug”. And in typical Swabian fashion, it means “not being criticized is praise enough”.

Being Swabified
Berlin residents who want to experience Swabian culture can head to Prenzlauer Berg in the northeast, a Swabian exclave famed for its excellent bakeries and unusually clean streets.
If you want to see just how significant an impact Schwabians have had on Germany, you'll have to head down to Stuttgart over the coming months to see the exhibit.

However, expect an uptight welcome from the stingy, Spätzle-eating, inventor behind the museum desk, and don't expect to see any Scottish tourists leaving a few pennies in the donation box either.

And for anyone wanting to hear what Swabian sounds like, and more importantly, what a US presidential debate would sound like in Swabian, see the video below:

Written by Charley-Kai John, with DPA