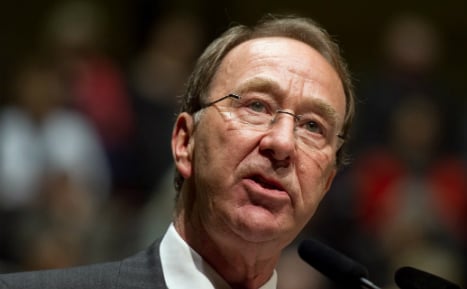 Despite the rise of populist and extreme right-wing parties across the continent, Professor Ian Kershaw – the acclaimed biographer of Hitler – insisted to AFP that drawing parallels with the rise of fascism was off the mark.

In fact, it is thanks to a “liberal and peaceful” Germany, which unlike some of its neighbours, is “very clear-eyed about its past”, that Europe is far more able to resist “a slide into barbarism”, he argued.

However, the historian, whose new book “To Hell and Back” spans the period from World War I to the outbreak of the Cold War, warned that “democracy has deteriorated on every level across the continent since 2014, and not just with [the return of a belligerent, authoritarian] Russia.

“This was a very upsetting book to write in so many ways,” he added.

“Like everyone else I am worried about what is happening now,” said the British academic, whose two-part biography of Hitler, “Hubris” and “Nemesis”, was a huge international bestseller.

“Brexit, the rise of the far right, xenophobia and racism… are all extremely worrying to say the least, and naturally make one think back to pre-war period,” he said.

“But I don't think we are returning to the dark ages of the 1930s because there are big differences as well as superficial similarities,” Kershaw insisted.

The biggest difference between then and now, he said, was that Germany is now a rich and stable beacon of social democratic values rather than an economic basket case “looking for revenge for [the Treaty of] Versailles. It is now probably the most pacific nation in the whole of Europe,” he said.

“Second, we now have a continent of democracies, admittedly flaky in parts when you look at Hungary and Poland,” Kershaw said. “While in the 1930s there were lots of authoritarian states and democracy was very much a contested system.”

Europe has also experienced a major shift from “militaristic to civilians societies. Just look at the balance between military and social welfare spending of then and now,” he added.

And despite its current travails, Kershaw credited the EU with keeping the peace. “For all its weaknesses, the EU has got Europeans working through cooperation and talking rather than immediately resorting to threats,” he said.

“Those patterns of doing things through negotiation developed by the EU have put us in a better place to withstand the sort of pressures Europe experienced in the 1930s,” Kershaw added.

“To Hell and Back” – which the New York Times declared “should be required reading in every chancellery” – is the first of two books in which Kershaw will plot the history of Europe to the present day.

The historian, who is revered in Germany, said that the new populism “is different to that of the 1930s but of course it has echoes of it… with antipathy towards outsiders now directed at Islam and migrants arriving from beyond Europe”.

The big shift towards identity politics also made it easier to blame a faraway Brussels “for problems whose roots are much closer to home”, he argued.

Although personally “appalled” by Brexit, having voted to remain in Europe, the author said Britain was never emotionally committed to the concept.

“Britain joined in 1973 purely out of economic self-interest, there was no idealism at all involved. Trade with the Commonwealth countries [of its former empire] had collapsed and we needed Europe to essentially rescue Britain, which it did.

“Germans for their part cannot see why the British are so hung up on sovereignty given it lost its [own] completely in the defeat of 1945 and recovered through pooling its sovereignty,” Kershaw said.

He said the second, as yet untitled, instalment of his overview of Europe's century is likely to be published in 2018.