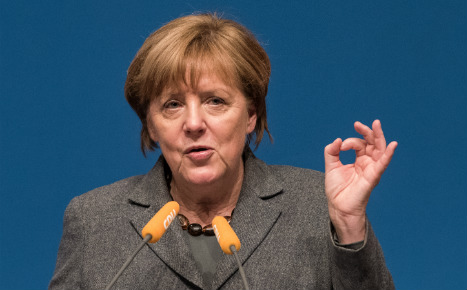 Merkel said at a media conference in Munich that “the algorithms must be made public, so that one can inform oneself as an interested citizen on questions like: what influences my behaviour on the internet and that of others?”

“These algorithms, when they are not transparent, can lead to to a distortion of our perception, they narrow our breadth of information.”

Merkel cautioned that social media users often only read information that seems to confirm their own opinions or that is recommended by like-minded people.

“That is a development that we need to pay careful attention to,” she said, stressing that such behaviour poses a threat to the essential democratic capability of being able to confront one’s own opinions with opposing ideas.

“The big internet platforms, via their algorithms, have become an eye of a needle which diverse media must pass through [to reach users],” she said, without specifically naming Facebook or Google. This fact poses an existential threat to other media outlets, she added.

The increasing polarization of politics, exemplified by the rise of Donald Trump, populist movements in Europe and the Brexit vote in the UK, have led to growing concern about so-called filter bubbles.

The term, coined by activist Eli Pariser, refers to the algorithms on social media sites and search engines that show users information based on things they have previously liked or searched for. As a result, many people who follow news in social media are exposed to a world view similar to their own, without being shown opposing views.

US President Barack Obama's former social media manager is among those to express concern about the effect of filter bubbles on democracy.

“More likely than not, you get your news from Facebook. Forty-four percent of US adults get news on the site, and 61 percent of millennials get their news from Facebook. If that doesn’t frighten you, you don’t know enough about Facebook’s algorithm,” Caleb Gardner said in a speech at Northwestern University in Illinois earlier in October.

“If you have a parent who's a Trump supporter, they are seeing a completely different set of news items than you are.”

“Facebook is actually, and social media in general, are the most diverse forms of media that are out there,” he said in May.