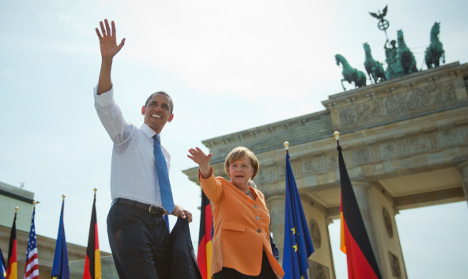 Obama is now set to stop by Berlin on November 16th, after the divisive US national election takes place on November 8th and following a trip to Athens.

But the trip will be short, as two days later he will head to an Asia-Pacific Economic Cooperation (APEC) summit in Lima, Peru.
Obama last landed in the Bundesrepublik in April to drop by the Hanover Messe – one of the most important trade fairs in the world. That visit was thought to be his last to Europe’s largest economy.
In Hanover, Obama praised Chancellor Angela Merkel for her “courageous” leadership during the ongoing refugee crisis, pushed the controversial TTIP free trade deal with the EU and US, and urged a preservation of a united Europe, ahead of the Brexit referendum vote in June.
His Berlin trip will involve a meeting with Merkel and the leaders of Italy, France and the UK. Discussion will most likely centre around the ongoing conflicts in Syria and Ukraine, as well as the refugee crisis and TTIP.
But the November election will determine how much Obama’s Berlin talks will ultimately impact future actions after he leaves office in January and is followed by either Hillary Clinton or Donald Trump.