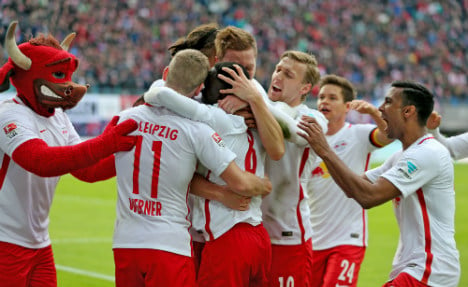 The newly-promoted team have won five and drawn three of their eight matches so far in their debut Bundesliga season.

Guinea international Naby Keita netted twice in Sunday's 3-1 win over Werder Bremen to leave them second, two points adrift of Bayern, who they face away on December 20th in their last outing before the winter break.

It is no surprise, then, that Bayern are paying close attention to what's going on at RB Leipzig, who earned their Bundesliga place with four promotions in seven years.

“They could be very dangerous, personally I find Leipzig very convincing,” said Bayern defender Mats Hummels, whose team-mate Joshua Kimmich, signed from RB in 2015, was in the Red Bull Arena to watch his ex-club beat Bremen.

But the Bundesliga new boys are working hard to keep their feet on the ground, resisting the tags of 'Bayern-hunters' imposed on them by a German media eager to talk up a potential title race.

It certainly has been a very good introduction to life in Germany's top tier.

They have claimed the scalps of Borussia Dortmund, Hamburg and Wolfsburg, and RB Leipzig are closing in on the record of 10 games unbeaten at the start of a season for a promoted club, set by MSV Duisburg in 1993/94.

Austrian head coach Ralph Hasenhüttl says his side must “stay humble and keep being greedy” for league points.

But despite the fairy-tale start, the club, which was founded by energy drinks giants Red Bull in 2009, have been given the cold shoulder by German football fans.

'Answer for everything'
A severed bull's head was thrown onto the pitch during a German Cup game at Dynamo Dresden in August.

Then Cologne fans staged a sit-down protest in September which meant the Leipzig team bus arrived late for an away league game.

Opposition fans are angered that RB have navigated their way around the German Football Association's '50+1' rule to prevent any individual having a controlling stake in a club.

Red Bull owns 49 percent of RB Leipzig, but the remaining 51 percent is owned by employees of the Austrian drinks firm.

Placards with anti-RB Leipzig slogans from rival fans regularly appear during games, but the negative sentiments pull the team together.

“We take the aggression from rival fans and turn it into positive energy for us,” said defender Willi Orban.

Any RB fans dreaming of Europe next season would be well advised to remember Hoffenheim, who finished the first half of their debut Bundesliga season in 2008/09 top of the table – only to end up seventh.

But there are good reasons to believe RB Leipzig can finish in the top four to earn a Champions League berth for next season.

The young team, which has no superstars, is eager to learn and is flexible.

“We changed the formation against Bremen after 45 minutes – and the boys did it superbly well,” said Hasenhüttl. “At the moment, there is an answer for everything.”

They have had sell-out crowds of over 40,000 for three of their four home games and there is a euphoria building in the city — formerly part of the communist East Germany – at having a top-flight team.

The previous dominant force in town was Lokomotiv Leipzig, Germany's very first champions in 1903 and Cup Winners' Cup finalists in 1987 who have since gone bankrupt and are now in the fourth tier – alongside RB's second team – after being reformed.

“There was already a huge amount of promotion euphoria amongst the fans and that's good,” said Rangnick of RB's run.

On top of that, sponsors Red Bull will be able to splash out for a new signing in January, should Hasenhüttl want to strengthen his squad.

And while most of their rivals are involved in two or even three competitions, Leipzig can focus just on the Bundesliga for the rest of the season having been knocked out of the German Cup in August.