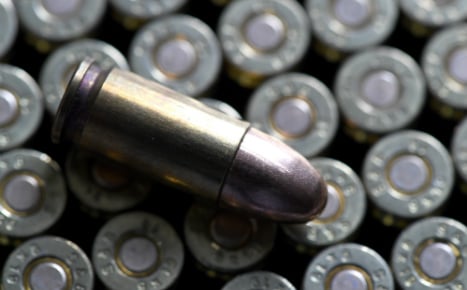 Government-approved small arms ammunition sales increased from €27 million to €283.8 million in the period in question, the government's weapons export report, seen by DPA on Tuesday, shows.

Of these sales, €275 million worth went to fellow EU countries, Nato allies or “Nato equal” countries (Australia, New Zealand, Japan, Switzerland). Contracts worth €5.4 million were approved for sales to Iraq.
Small arms are responsible for most civilian deaths in the civil war in Syria and Iraq, where Germany backs Kurdish militias.
At the same time, approved contracts for the sale of small arms themselves fell slightly, from €12.4 million to €11.6 million in the same period.
Economy Minister Sigmar Gabriel has the power to approve or reject weapons exports. At the start of his time in office in 2013, Gabriel, who is also leader of the Social Democratic Party (SPD), pledged to reduce Germany’s weapons sales.

During this period, small arms sales have dropped significantly, with the government approving fewer sales to countries in unstable political regions.

But for the opposition, the steps taken by the government still have not gone far enough.

Jan van Aken, MP for Die Linke (the Left Party) has called for an outright ban on small arms sales.

Overall in the first six months of 2016, the government approved arms sales totaling €4.029 billion, an increase of half a billion euros on the first half of the previous year, it was revealed in July.

Turkey has massively increased its weapons purchases from Germany during this time period, rising from 25th to 8th in terms of the countries with the highest value of overall purchases.

Ankara bought a total of €76.4 million in arms, two-thirds of which was for jet parts, drones, and engines.

South Korea also rose up the charts from tenth to fourth, buying nearly €205 million of weapons in the first half of the year.

Saudi Arabia, which Berlin views as a stabilizing influence in the Middle East, increased its arms purchases from €179 million to €484 million, buying helicopters, jets and aircraft parts necessary for midair refueling.